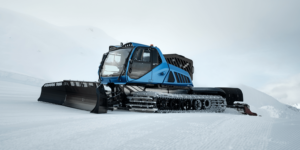 For those of you not overly familiar with the machines common on ski slopes, snow groomers have the task of moving, flattening, rototilling, or compacting snow to maintain ski hills.

The Husky eMotion prototype has an output of 200 kW and enables a working time of up to three hours with its 190 kWh battery. Prinoth is also entering the active test phase with the 400 kW Leitwolf H2Motion fuel cell concept model.

If we manage to curtail climate change enough so that there are actually ski slopes in the future, it will no doubt be fantastic to have them graded with quiet, electric, fume-free vehicles.

Tesla is taking heat from the competition