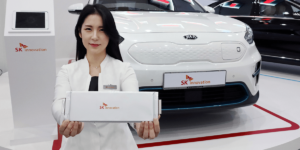 The South Korean battery cell manufacturer SK Innovation plans to issue a $1 billion green bond to finance the expansion of its production capacity in the US which amounts to around 810 million euros.

Subsidiary SK Battery America will issue the green bond later this month for the construction of its second battery factory in the state of Georgia, a company spokesperson said without giving further details.

This type of bond is most often used to finance environmentally friendly projects. The original investment in the Georgia plant was $1.67 billion (1.35 billion euros). Over the past year, SK Innovation had invested another $670 million (about 543 million euros) in its US subsidiary.

The higher investment has become necessary as SKI began building a second battery cell factory on its Georgia site in July due to a sharp rise in demand for EV batteries, which is scheduled to begin production in 2023. The first factory is currently reported to be 90 per cent complete and is expected to begin pilot production in the first half of 2021. Together, the two factories are expected to have a production capacity of 21.5 GWh.

The CIP cells manufactured in Georgia are to be delivered to Volkswagen’s nearby US plant in Chattanooga (Tennessee), among others. The Wolfsburg-based company plans to build the ID.4 there from 2022, and conversion work for MEB production is currently underway. Another major customer of the SKI plant in Georgia is Ford; the U.S. group apparently wants to use the batteries in the announced electric version of the best-selling F-150 pickup truck.

A legal dispute with Korean competitor LG Chem is still delaying SKI’s plans in the USA. Despite the dispute, SKI is already recruiting employees for cell production in the first of the two factories.