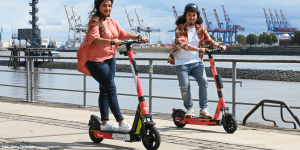 There have been a number of negative experiences with electric scooters in the Australian capital Canberra, which were introduced for hire there in August. A report has now surfaced citing the dangers of electric scooter use in the city.

Within three months of their launch, 60 electric scooter riders ended up in accident and emergency departments. In addition, the scooters are generally parked in inappropriate places since the fine for doing so is just one single dollar. The report also cites “e-hoons”,which are a “group of yahooing young men” who apparently often seen “riding on footpaths at maximum speed before doing skids, fishtails and doughnuts.” What is worse: “They know their rights.”

In all seriousness, however, electric scooter safety has become an issue of increasing concern, as the benefit of people leaving their car at home is replaced by the annoyance of new vehicles on the street. Particularly difficult is that riders often do not take riding a scooter as seriously as riding other vehicles, which are often more strictly regulated. While it is not unlikely that someone who enjoys doing “fishtails” may wind up in a hospital, the issue unfortunately also extends to pedestrians.

Some efforts are being made to make the technology safer, however, legislation will likely provide the faster answer for many cities.
canberratimes.com.au

Ein Kommentar zu “Complaints in Canberra on use of electric scooters”