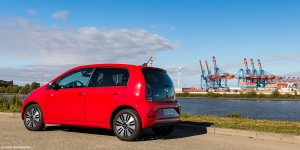 Volkswagen is launching a recall for its e-Up small electric car. Due to faulty battery cells, there is a risk of a short circuit or fire. No incidents have been reported so far, but the decision was taken as a precautionary measure – which is not too dramatic since the number of vehicles involved is very small.

Only 122 units of the e-Up are affected by the recall worldwide, 81 of which are in Germany. A number of electric car companies have been plagued by battery troubles and had to recall models, particularly towards the end of last year. In October last year, the Chinese startup WM Motor had to recall 1,282 of its EX5 electric cars after four of its vehicles caught fire within one month.

Volkswagen and Chinese startup are not alone with recalls due to battery trouble. In the first week of October 2019, Hyundai had to recall  Kona Electric cars in South Korea, which initially involved some 25,000 models. By the middle of this month, it became clear that models sold overseas were also affected with reports that now affects around 77,000 Kona Electric.

Late last year, BMW also had to have a major recall of their PHEVS. The total number of vehicles involved is 26,700 worldwide. One-third of these units are in customers’ hands; the rest are subject to a delivery stop. These recalls are, like the WM Motors recalls, due to possible impurities in the production process of the battery cells which an increased risk of fire in several series.

North America carmakers have not been spared by recalls due to battery troubles. Just a day after we reported the BMW recalls, it became clear that Ford was having trouble getting its Kuga PHEV battery problems under control with sales stops and some 20,000 recalls of Kuga PHEVs across Europe. Just two days later we reported that Chevy Bolt was launching an investigation in response to complaints about Chevrolet Bolt electric cars catching fire. Again, there appears to be a problem with the batteries. So far, there has not been an official recall.

That being said, Volkswagen is not only having trouble with batteries. The Geerman carmaker has been having problems with potential fire hazards with its gasoline models, which caused the German carmaker to recall the Jetta model in the USA.

Complaints in Canberra on use of electric scooters

ICEing has yet to exhaust itself