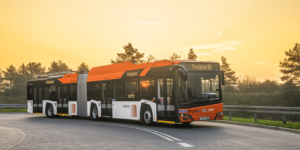 Solaris increases its business in Romania. The latest e-bus order came through the town of Brașov, a city in Transylvania. They expect the delivery of 25 trolleybuses within the next twelve months.

The buses of type Trollino 18 bear a battery on board so they can cover parts of the route without hooking onto the overhead wire. The models Brasov ordered run on a 240 kW electric motor. The 18-metre Trollinos can carry up to 133 passengers, including 41 seated.

Solaris also stresses that they had completed an earlier order for 26 vehicles of this type in July 2020. The operator from Brasov is on course to exchange the whole – and significantly expand – the trolleybus fleet currently in use. The Trollino will replace diesel buses on new trolleybus routes launched in the city.

Brasov is one of five cities in Romania that has emission-free Solaris buses – trolleybuses and electric buses as reported. Since 2002, the manufacturer claims it supplied nearly 300 vehicles to Romanian carriers, including over 100 Trollino vehicles and 41 Urbino 12 battery-electric buses.

Solaris is based in Poland and has been in the bus business for 25 years. In September 2018, the Spanish CAF Group acquired Solaris.