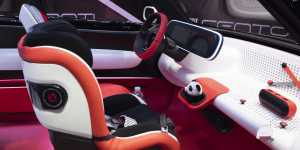 Norway has not always been the promised land for EV enthusiasts. In fact, it took the oil-producing nation a while to become a fan of electric driving. Incentives played a role of course but before the money came a push in popularity from an unlikely source.

Cue in Robbie Andrew. According to his Twitter bio, he is a “senior scientist at CICERO Center for International Climate Research”. He drafted a whole thread why Norwegian pop group a-ha was “instrumental in introducing incentives for electric cars in Norway.”

What follows is a hidden gem in electric mobility history. It starts in 1989 and involves a converted Fiat Panda. The tiny car would soon become the unlikeliest tour bus in pop history as a-ha drove around the country. They even added a touch of punk to the endeavour as they bounced road tolls – back then there was no category for EV, and they thought, the zero-emission car should go free anyway.

I doubt there are many outside of Norway that know that the Norwegian pop group A-ha was critical in the introduction of electric car incentives in Norway. I certainly didn’t. Read on… pic.twitter.com/41PdATJ0rS

EVs would indeed be exempt from road tolls in 1996 – we’d like to think a-ha has helped along the way. Whether the little electric Fiat also inspired tracks like “Stay on These Roads” or other songs remains open to interpretation.

Fiat, in any case, may actually build the Panda in its own electric version. The 2019 Concept Centoventi was scheduled for the series when we last checked in March 2020. If the Panda-e makes it into the showrooms, it will utilise the same platform as the Fiat 500e.

Do indulge in the full thread on Twitter – the images of the finest 80ies fashion and a very young a-ha crew are worth it.

Trouble in the Berlin Tesla showroom

The tiny car trio has been recalled