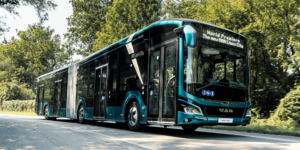 Public transport operator VAG Nürnberg has ordered 39 e-buses from Germany’s MAN Truck & Bus, including 28 Lion’s City 18 E and eleven Lion’s City 12 E. For MAN, this is the largest electric bus order to date and the company’s first order ever to include articulated e-buses.

MAN began making the twelve-metre-long, fully electric Lion’s City 12 E solo bus began at MAN’s Polish plant in Starachowice in October 2020. The 18-meter articulated bus variant called Lion’s City 18 E is scheduled to go into series production locally in the first half of 2021. The first examples to roll off the production line will go to Nuremberg as the city expects delivery within this year.

Verkehrs-Aktiengesellschaft Nürnberg (VAG) has enjoyed a long partnership with MAN: including the vehicles on order, the German company’s fleet consists of around 200 vehicles which include diesel, natural gas, hybrid, and electric buses. 150 of these come from MAN Truck & Bus. The two companies are also collaborating on field trials. The electric solo and articulated buses will be charged exclusively in the depot with green electricity and can carry 88 and 120 passengers respectively.

The Lion’s City models are equipped with a central motor on the rear axle or the articulated bus, with two central motors on the second and third axles. The powertrain draws its energy from batteries on the vehicle roof with an installed 480 kWh (solo) capacity or 640 kWh (articulated bus). According to the Volkswagen commercial vehicle subsidiary, this is based on mature battery cell technology from the Group’s modular system. This allows ranges of 200 to 270 kilometres.

The Nuremberg order is propelled VAG’s planned electric bus offensive. The company first decided in 2017 to procure only electric buses from 2020, and now, with the new vehicles, the entire bus fleet is to be successively electrified. Specifically, the public transport operator intends to purchase 52 all-electric buses in a first step by the end of 2022. VAG had already received a funding decision for this in November 2019.

VAG expects to have converted half of its fleet of 160 buses to all-electric operation by 2030. To have sufficient charging stations for the electric city buses, the Nuremberg transport company is currently building an e-bus port with 39 parking spaces between the depot and the operating workshop with Siemens’ help. This should be ready for operation in mid-2021.