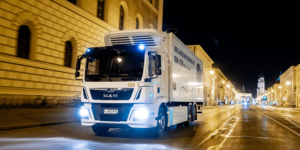 Punctuality and plannability increased to almost 100 per cent. Naturally, noise reduction was also significant and made the new timeframes more feasible.

MAN ran the test drives as part of the EU’s EIT Urban Mobility project ZEUS. ZEUS is short for Zero Emission off-peak Urban deliverieS and aimed to reschedule deliveries to off-peak times, including nighttime. The idea is to decrease noise and congestion levels in cities like Munich while keeping the supply lines open.

“Every scientific study shows that moving inner-city deliveries to off-peak hours would mean that logistical processes could be executed more quickly and that the impact on all other traffic would be significantly lower than during peak hours,” explains Clemens Baumgärtner, Spokesperson for Labour and Economic Development for the City of Munich.

The tests were run with the MAN eTGM since November and prove the points as made above. Apart from increased efficiencies, noise reduction results could not speak any louder. “Perceived noise is reduced by at least a quarter, and in some cases by half, especially at speeds below 30 km/h,” reports Dr Christoph Jessberger, who works in Predevelopment at MAN Truck & Bus and oversaw the ZEUS project.

Volkswagen-owned MAN has been making the smaller delivery e-truck eTGM in a small series since late-2019. The decision to kickstart production in Austria followed real-life tests with clients. One of the largest fleets of eGTM trucks is operated by DPD in the UK. The mail and logistics company had ordered 100 e-trucks about a year ago. MAN officially launched the right-hand-drive eTGM in April 2020.