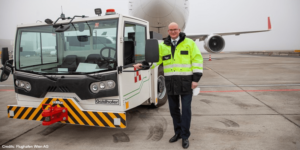 Vienna Airport is building its fleet of electric ground vehicles. The Bison E620 is a tow tractor from Goldhofer that can tow and push aircrafts weighing up to 260 tons, i.e. large aircrafts such as the Boeing or Airbus jets.

The airport of Austria’s capital has some experience in zero-emissions operations. Their fleet includes around 400 EVs such as baggage trucks, catering lift trucks and passenger cars. The latest addition, the Goldhofer Bison E620, is the most powerful towing vehicle in its weight class, Vienna Airport says. At least when looking at airport operations in Europe.

German supplier Goldhofer considers it a “perfect pushback solution” since aircrafts cannot drive in reverse. The Bison can push large aircraft models such as a Boeing 777-200 or an Airbus A350. It, therefore, covers the most common aircraft models at Vienna Airport, including the Embraer jets. The tow tractor weighs 28 tons and features a 175kWh battery and on-board charger for opportunity charging in multiple shifts.

The new e-Tug will be tested for two months. If testing proves successful, Vienna Airport will buy more but does not say how many. Vienna Airport aims for CO2-neutrality by 2030.

Just as Vienna Airport, Goldhofer is no stranger to electric vehicles for ground operations either. The Bison E620 has been preceded by the Sherpa E that they developed with Suncar in 2018. The latter was much weaker though – when talking Bison strength – and had a maximum towing capacity of up to 80 t. That is more for cargo, not full-grown jets.

The Bison E620 comes in three different cab options, and the company also offers a modular battery system on its website.