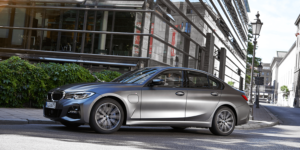 BMW is expanding its plug-in hybrid range for the 3 Series and 5 Series by two additional models each from March. The 320e and 520e will be added to the saloon portfolio and Touring versions of both model series. In Germany, prices will range between 47,450 and 55,900 euros before subsidies.

The Munich-based company describes the new vehicles as future entry-level variants. They have in common the plug-in hybrid system with 150 kW system output and 350 Nm torque, which is made up of a 2.0-litre internal combustion engine with 120 kW and an electric motor.

The two engines transmit their drive torque via an 8-speed gearbox to the rear wheels or, in the all-wheel-drive variants, to all four wheels. The battery of all plug-in hybrid models in the new BMW 3 Series and new BMW 5 Series is stowed under the rear seat bench. It has a gross energy content of 12 kWh. In purely electric driving mode, both model series’s new PHEVs can reach a top speed of 140 km/h.

All models come standard with two charging cables that can power the battery at conventional household sockets, wall boxes or public charging stations. With a maximum charging power of 3.7 kW, the high-voltage battery can be charged from 0 to 80 per cent in 2.6 hours and from 0 to 100 per cent in 3.6 hours. Depending on the model, the boot capacity is 375 to 430 litres; in the Touring models, the storage space can be extended to 1,560 litres. The maximum permissible towing capacity is 1,500 kilograms for the BMW 3 Series models and 1,700 kilograms for the BMW 5 Series models.

BMW also provides customers with the so-called Live Cockpit Plus including Connected Package Professional as standard equipment – and thus access to digital services, some specially designed for electric mobility. These include BMW eDrive Zone for emission-free driving in specially defined zones (“geofencing”) and BMW Points, a reward programme for intensive use of locally emission-free mobility. Points collected can then be converted into a credit redeemed when charging the high-voltage battery at public BMW Charging stations.

Also on board are modern assistance systems, including the “Active Pedestrian Protection” system, a specific shift programme for the 8-speed transmission including brake downshifts and automatic climate control (with extended features on the 520e models).

From March onwards, the BMW Group will offer 15 BMW brand models and one Mini model with plug-in hybrid drive. By 2023, the Munich-based company aims to have 25 electrified vehicles in its portfolio. For the 2021 financial year, the Group is also aiming to increase vehicles’ sales with electrified drive by around 50 per cent compared to 2020.