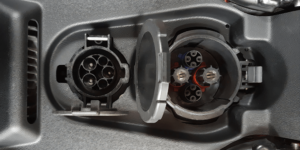 The Italian electric motorbike manufacturer Energica is now adding the CHAdeMO fast-charging standard to its motorcycles. Energica is thus responding to the needs of the Japanese market, which the company has just entered.

The electric motorcycle manufacturer has taken the opportunity to offer its bikes with the CHAdeMO option worldwide and extend it to all Energica MY2021 motorcycles. The company has previously made headlines for adding the CCS fast-charging standard to their range.

“Obviously we had to equip the motorcycle with the independent CHAdeMO fast charge socket to which we also added a socket for slow charging. Technical studies related to the design ensure we can always position the system under the seat of the vehicle, where the CCS Combo standard has already been present.”

With the new option, charging times will remain identical to the CCS Combo standard, which allows fast charging at a rate of 6.7 km per minute or on slow charge at 63.5 km per hour.

In 2017 the motorcycle manufacturer already joined CCS standard with the CHarIN. Energica put its first fast-charging station into operation in Selva di Val Gardena (South Tyrol) back in 2017. The specialist for electric motorcyclesannounced earlier the same year that it would initiate a charging network along popular biking routes in Italy and California.

“Since the inception of the Energica project, we embraced the combined charging system (CCS) as standard,” said Giampiero Testoni, CTO Energica Motor Company S.p.A. “Today, we have also joined the second global standard, CHAdeMO. In this way, we are not only responding to the needs of the Japanese market we’ve just entered, but to any customer around the world who prefers this recharging system.”

In November 2019, Energica presented the 2020 model year of its electric motorcycles at the EICMA in Milan which are all available with a 21.5 kWh battery for longer range. The 2021 models are already available with the option of CHAdeMO sockets. According to Energica, from 2019, the commitment to the new MotoE electric racing series has led to several technological improvements, including the higher-capacity battery.