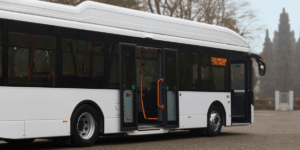 VDL Bus & Coach has received orders from three transport companies in Germany for a total of twelve Citea SLF-120 Electric. Nine of the electric buses will go to Kraftverkehrsgesellschaft Braunschweig, two to Verdener Verkehrsgesellschaft and one to Stadtbus Goslar.

The three transport companies joined forces in advance to submit the collective order to the Dutch bus manufacturer. All twelve electric buses are expected to be delivered in December this year.

The three German public transport companies are planning to operate the electric buses primarily in urban transport and will mainly be charged at night via CCS charging plugs in the bus depot. According to VDL, their batteries have a capacity of 350 kWh.

“The region-wide introduction of electric mobility is a major, future-oriented project for our regions of Verden, Goslar and Braunschweig,” says Axel Gierga, Managing Director of KVG Braunschweig on behalf of the cooperating transport companies. “We can only achieve this with strong, experienced partners. That is why we are looking forward to the cooperation with VDL Bus & Coach.”

For KVG Braunschweig, meanwhile, the nine e-buses on order are just the beginning. In October, the public transport operator received a grant from the federal government for the procurement of 32 electric buses. The first nine buses are to be followed by another seven electric buses in the near future. The remaining 16 are scheduled for 2021/22. Five electric buses are already in operation under the KVG umbrella.

“We have a very positive view of current developments in Germany,” says managing director Boris Höltermann of VDL Bus & Coach Deutschland GmbH. “More and more subsidies are becoming available, which has made the choice of purchasing zero-emission buses easier. If transport companies cooperate in a targeted way, their ability to act will naturally be even greater and cities will be able to implement their desired greening programmes faster and more effectively. As a European frontrunner in electric public transport and a sustainable cooperation partner, we can strengthen these projects.” Since 2015, VDL says it has delivered more than 100 fully electric vehicles to Germany.

Meanwhile, VDL has announced the next generation of its Citea electric buses for this year. They will be unveiled in October at Busworld in Brussels. So far the manufacturer is only revealing this much: the new bus generation will have an innovative composite sidewall construction that is 15 per cent lighter than a conventional sidewall. In addition, the battery pack will be housed in the floor as standard. According to VDL, this results in better weight distribution, more stability and a higher passenger capacity. And: “By choosing efficient components, a lightweight construction, good insulation, an aerodynamic design and optimal energy management, the vehicle’s energy consumption is reduced by up to 30 per cent.” VDL plans to reveal more about the new electric buses in the next few months.

with reporting by Cora Werwitzke