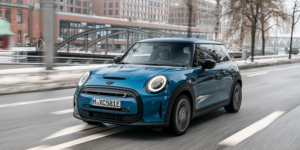 BMW will give the all-electric Mini Cooper SE a facelift in March. To mark the launch of the new edition, the brand is also bringing out a special edition model called the Mini Electric Collection.

From March, the Mini Cooper SE, like its combustion-engine siblings, will arrive in Germany with a reduced design language that, according to a recent announcement by its parent company BMW, “brings out Mini’s unmistakable design features even more strongly”. Highlights of the redesign are the redesigned front end and the so-called Multitone Roof. We summarised further details with our earlier report here. The revised Mini Cooper SE starts at 32,500 euros in Germany, for the special model Mini is asking for a gross list price of 35,600 euros. It is unclear whether Mini will also sell the model in other markets.

According to the manufacturer, the special edition model combines the new look with “exclusive design features and high-quality equipment details”. It comes in the Island Blue metallic exterior paint, which is being offered for the first time for the electric Mini, or in the new Rooftop Grey metallic colour variant. The roof features a colour gradient from San Marino Blue to Pearly Aqua and Jet Black (“Multitone Roof”). Simultaneously, the exclusive design of the bonnet and side stripes also contribute to the vehicle’s appearance. Other features of the special model include black exterior mirror caps, 17-inch alloy wheels, LED headlights including a matrix function for the high beam, specially designed sports seats, a sports leather steering wheel in Nappa finish and exterior elements in high-gloss black (door handles, radiator grille surround, etc.).

New equipment packages in comfort, connectivity and driver assistance are also optionally available for the edition model. For the first time, Mini offers a steering wheel heating system. In terms of connectivity, the standard Connected Navigation package can be supplemented with a head-up display, telephony with wireless charging, the Concierge Service, and MINI Connected XL (subsumed under the package name “Connected Navigation Plus”). In addition to a new Lane Departure Warning, the new Driver Assistance Plus package also includes Active Cruise Control, which now includes a Stop & Go function for the first time on Mini.

The drive of the special model remains unchanged, just like the Mini Cooper SE itself. The electric motor onboard has an output of 135 kW and is supplied with energy from a 32.6 kWh battery. Power is transmitted via a single-speed automatic transmission. The British put the range at 203 to 234 kilometres according to WLTP, the power consumption at 17.6 to 15.2 kWh/100 km and the top speed at 150 km/h.