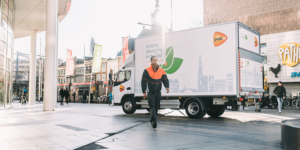 In the Netherlands, zero-emission zones for delivery traffic are coming in at least 14 Dutch municipalities. They will only let purely electric delivery vans and trucks drive through from 2025.

Municipalities, transport companies and Dutch Environment Minister Stientje Van Veldhoven have already signed a corresponding agenda called the ‘urban logistics implementation agenda’. One of the fourteen cities that has decided to implement a zero-emission zone in 2025 is Tilburg, and there is, of course, Amsterdam. The concept of “milieuzones” has some prominence in other provinces too although seldom went as far as being electric-only.

State Secretary Van Veldhoven said that the new agreements would ensure that “within a few years, supermarket shelves will be stocked, waste will be collected, and packages will arrive on time, yet without any exhaust fumes and CO2 emissions.”

The announcement also sees the number of these emission-free zones to rise to about 30 “spread across the whole of the Netherlands” by summer. This is in fact a provision already set out in the national Climate Agreement. Municipalities must, however, observe a minimum of four years notice when intending to implement such zones.

The government in The Hague also points to “transparent agreements” which will apply to all the zero-emission zones and aim to make the transition feasible, for SME in particular. There are already grant schemes in places for what the Department calls clean vans and lorries.

To help businesses get ready to comply, entrepreneurs may apply from 15 March to receive 5,000 euros in subsidies to buy or lease electric vans. The Dutch government also plans to open a similar subsidy programme for electric trucks in March.

The announcement also stresses existing collaboration with grid managers, provincial and municipal authorities. It claims these were making “every effort to provide sufficient charging stations at locations where they are needed”. There was no further detail.

Elisabeth Post, President of the Dutch Association for Transport and Logistics, called for “collaboration with all the parties involved”. She wants to further “consider the matter from a practical perspective. Where are charging stations required? And how can we efficiently join forces, for example, by combining goods on the outskirts of the city?”

The Dutch government estimates that implementing zero-emission zones will save about one megaton of CO2 per annum by 2030, which compares to the total annual emission from natural gas consumption by all the households in The Hague and Rotterdam combined.

They also claim the Netherlands to be the first country to enable cities to implement zero-emission zones. At the same time, similar initiatives are also underway in Madrid, Paris, or Oslo. However, most start with banning diesel and the most polluting vehicles first in so-called low-emission zones (LEZ). Research by Renault counted over 300 such low-emission zones in cities across Europe in 2019. London too has gradually worked to now expand the ultra-low emission zone in recent years.