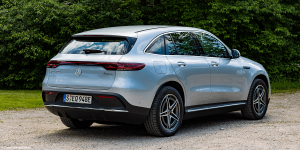 After Mercedes-Benz had already postponed the US launch of its EQC by at least one year to 2021, the manufacturer has now apparently decided not to bring the EQC to the United States at all for the time being.

This was reported by Autoblog with reference to a spokesperson for the company. “Following a comprehensive review of market developments, the EQC will not be offered in the United States for now,” the spokesperson stated. This leaves open the option of offering the EQC on the US market at a later date. But this is not likely, as the market environment is becoming increasingly tough as more modern models become available.

The EQC, which is based on the GLC combustion engine model, was also developed with US regulations in mind, so a market launch should not cause high adaptation costs. Especially since sales on the US market were planned for a long time; according to the report, three different equipment lines have already been described in detail. The base price was already established to be $68,895 in the US.

At the end of 2019, Mercedes had already postponed the US launch of the EQC, originally planned for 2020, to 2021. At the time, the move was explained to US customers as a “strategic decision”, as markets had to be prioritised in view of the “high level of interest worldwide”. In addition, there was unofficial speculation about the battery shortage at the time and the EU’s CO2 requirements as the reason – every EQC Mercedes could sell was needed in Europe, according to the rumours.

The previous rationale no longer seems to apply now, with the spokesperson referring to the “comprehensive review of market developments”. In the US market, the EQC would have competed against the Audi e-tron, Jaguar I-Pace and the Tesla Model X, as well as the smaller Model Y – and potentially the Ford Mustang Mach-E and, from 2022, the Cadillac Lyriq. BMW will also not sell the iX3 in the US, where the larger iX will be offered as an electric SUV.

According to the Mercedes spokesperson, the first EQ model for US customers will be the EQS, which is to premiere in the coming weeks and come to dealers in autumn 2021.