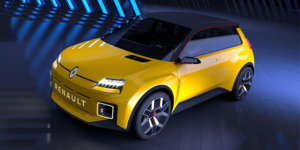 In order to be able to sell the production version of the all-electric Renault 5 Prototype, planned for 2023, at a profit, Renault is considering the use of LFP batteries. The price range of the Renault 5 is said to be between 20,000 and 30,000 euros.

Renault CEO Luca de Meo told media representatives about the LFP batters, saying that the cheaper batteries in combination with the new CMF-B EV platform for electric compact cars ensure that this target is reached.

Before subsidies, many small electric cars currently start at prices of around 30,000 euros – for example, the Renault Zoe, Opel Corsa-e, or its sister model Peugeot e-208. However, for the next generation of small electric cars – in Renault’s case the Renault 5 presented at the strategy presentation and later confirmed as a series model – both Renault and Volkswagen are aiming for the range around 20,000 euros as the base price before subsidies in the cheapest configuration.

LFP batteries are more stable and also more resistant to “thermal runaway” in the event of an accident. They do not contain cobalt, which is still one of the most expensive metals in battery production. This is one of the reasons why they are cheaper than lithium-ion batteries with NMC cathodes – i.e. nickel, manganese and cobalt.

However, the energy density of LFP batteries is still – despite great progress in recent years – lower than that of NMC batteries. A ready-to-install battery is heavier but cheaper. In addition, LFP batteries can only offer reduced performance in cold weather.

It remains to be seen, however, whether the electric Renault 5 will be offered exclusively with LFP batteries or only the cheaper entry-level version – possibly the top version will remain at the upper end of the price range mentioned for NMC batteries. This is indicated by a somewhat restrictive wording in the report – “at some point in its life cycle”.

Cost remains a very important factor for de Meo, as the Renault boss points out. “We plan it as a very competitive platform in terms of cost,” he said. “This will allow us to sell cars in the heart of the market in terms of budget, say 20,000 to 30,000 euros, and still make money.”

He added that they were about three years away from producing a car based on the CMF-B EV. “But we see the opportunity to get into the cost range that would allow us to sell a B-segment electric (small) car at the price of an internal combustion engine car, maybe hybrid or PHEV.”

LFP batteries are not in themselves a new development; in the passenger car sector, they are currently used mainly in China, for example by the manufacturer BYD. Tesla now supplies its Model 3 SR+ built in China with LFP cells from CATL. According to unconfirmed reports, Volkswagen is also looking into the use of LFP batteries for its announced small electric car. However, no manager from Wolfsburg has yet spoken as openly as de Meo about the possible use of lithium iron phosphate batteries.