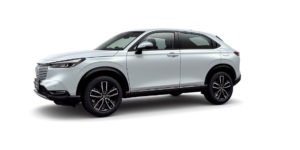 Honda has presented the new generation of its HR-V compact SUV, which will be launched in Europe at the end of this year. After the small car Jazz, the new HR-V will be the next model that Honda will only offer with hybrid drive in Europe.

The compact SUV uses Honda’s hybrid drive with two electric motors called e:HEV. This is already known from the Jazz. Since Honda does not provide any performance data in the current announcement, we use the data from the Jazz as a guide. The hybrid drive combines a 1.5-litre DOHC i-VTEC petrol engine with two electric motors in the small car. The system output is 80 kW. Among the two e-motors, one serves as a traction motor for propulsion and one as a generator motor for energy recovery.

In hybrid mode, the generator produces electricity via the combustion engine and via recuperation, which is either temporarily stored in the battery or transferred directly to the traction motor next to it. However, in a small window, roughly between 80 and 100 kph, it is more efficient for the petrol engine to drive the wheels directly. In the other cases, Honda expects a higher efficiency from the conversion into electrical energy.

Instead of details on the e:HEV drive, Honda devotes more attention to the looks in the current announcement on its revised compact SUV. The design of the HR-V is bold, sleek and inspired by a coupé, it says. It includes a new integrated grille, a long bonnet and sharper, more vertical sides. Honda also says it was keen to “further enhance the SUV aesthetic”.

The compact SUV is part of Honda’s drive to electrify all core models in Europe by 2022 and joins the two full hybrids CR-V and Jazz and the fully-electric Honda e passenger car.

Tesla lowers US base price of the Model 3 & Model Y

US Ford dealerships will need to invest $35,000 for EVs