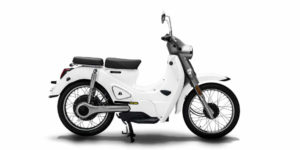 The development and production of the models will be carried out “by experienced partners in Asia”. Motron Motorcycles is starting off with a product range of ten two-wheelers, less than half of which are electric. The electric line-up has three electric scooters and one electric minibike. The electric models Whizz, Cubertino, Voltz and Vizion are in the L1e class (up to 45 km/h) and should be available at introductory prices between 1,899 and 2,999 euros. Sales of the models will start in Germany, Austria, Switzerland, Italy, Spain, France, Belgium, the Netherlands and Greece and will be expanded to other European countries in the course of the year.

The KSR Group are looking towards their Asian partners for the development and production of the vehicles to lever greater experience, technical developments and industry contacts there (exactly where in Asia, is not revealed on the company’s website). The look of the two-wheelers has been created by the KSR Group design team in Austria who say that the Motron design is characterised by “fresh yellow accents on the simultaneously modern and discreet colours black, grey and white”.

Details of the electric vehicle models can be found on the new brand’s website. The Cubertino, for example, is an electric scooter with a retro design with a range of 56 kilometres. It has a 1.5 kW wheel hub motor from Bosch and a replaceable lithium-ion battery with a storage capacity of 1,560 Wh on board. Other features include two seats, a permissible total weight of 228 kg and a consumption of 37 Wh/km. The price: 1,999 euros.


The Whizz comes in a modern design and is said to have a range of 46 kilometres. The battery is smaller (1,440 Wh), but the wheel hub motor is more powerful (2 kW) and has a higher torque (45 Nm instead of the Cubertino’s 32 Nm). The single-seat Whizz is equipped with hydraulic disc brakes (not mechanical drum brakes like the Cubertino). Consumption is said to be 33 Wh/km, and the price is 2,399 euros.

At 1,899 euros, the single-seater Voltz is the most affordable electric model from the new Austrian brand. It has a 2 kW wheel hub motor with 47.5 Nm torque in combination with an even smaller battery (1,248 Wh) as well as a range of 49 kilometres and a consumption of 30 Wh/km.

This leaves only the electric mini bike Vizion: The one-metre-high and 1.76-metre-long model comes with a 1.85 kW mid-mounted motor with 14.6 Nm and a battery with 1,872 Wh, which should contribute to a range of 79 kilometres. The importer quotes a consumption of 37 Wh/km. The price is 2,999 euros.

Michael and Christian Kirschenhofer, owners of KSR Group say that: “The launch of the new Motron brand hits exactly the pulse of the times. Especially in times like these, when people are longing for a fulfilling balance to their pandemic daily lives, we appeal to a target group that can find in Motron a brand to start a new hobby, a new passion. Our brand slogan ‘GET OUT THERE’ underlines our approach to fight the difficult times, get out and have fun on a Motron.”