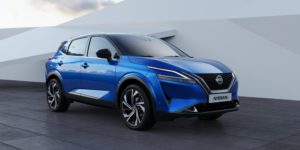 Nissan has presented the third generation Qashqai compact SUV. The new edition of the bestseller is the first Nissan in Europe to come optionally with an e-Power hybrid drive. The petrol engine is used exclusively to generate electricity, while only the electric motor is responsible for driving the wheels.

Technical data on the Qashqai e-Power had already been provided by Nissan in January: the electric motor produces 140 kW, the 1.5-litre Benizner as power generator 115 kW. As with the Nissan Leaf, the new Qashqai e-Power also enables “one-pedal driving”.

Fuel consumption figures for the 1.3-litre petrol engine and the e-Power drive are not yet available. A possible all-wheel drive option for the e-Power (as offered in Japan with the Nissan Note e-Power) is not mentioned by Nissan in the current press release – and only a 2WD variant is listed in the technical data.

What is new compared to the information from January is that the final design of the vehicle has now also been revealed. Like its predecessors, the third-generation Qashqai was designed by Nissan Design Europe based in London, while the technical development was carried out at the Nissan Technical Centre Europe in Cranfield (GB). The new model also has the typical Nissan radiator grille in a V-shape, but the headlights are much narrower.

However, the Japanese company has not dared to experiment; their European bestseller is not intended to be as polarising as the smaller Juke, for example. All in all, the third generation looks like a further development of its predecessor – only slightly larger in all dimensions. The length has increased by 3.5 centimetres, the wheelbase by two centimetres, the width by 3.2 centimetres, the height by 2.5 centimetres. And the rims are now up to 20 inches in size on request, previously they were a maximum of 19 inches.

In addition to the slightly larger dimensions, Nissan claims to have improved the packaging in many areas during the generation change. It is also said to offer more space – for example 1.5 centimetres more headroom all around or 2.8 centimetres more legroom for passengers on the rear seat. In addition, the boot has become 74 litres larger, as the load floor could be lowered by two centimetres due to the redesigned rear suspension.

In the redesigned interior, the Japanese say they have placed emphasis on “comfort, connectivity and control”. The materials are said to be of higher quality, while the ambient lighting provides a “high-quality and harmonious atmosphere”. “Extensive attention has been paid to the ergonomic and aesthetic quality of the switch gear and buttons with a high quality,” Nissan wrote.

The now nine-inch NissanConnect system infotainment display has a higher resolution and supports Apple CarPlay (wireless) and Android Auto in addition to the Nissan system. Many functions are also said to be controllable via the Google Assistant or Amazon Alexa voice assistants. The digital cockpit for the driver even measures 12.3 inches. A 10.8-inch head-up display is also available.

Sales of the Qashqai e-Power are scheduled to start in 2022, prices are not yet mentioned.

US Ford dealerships will need to invest $35,000 for EVs