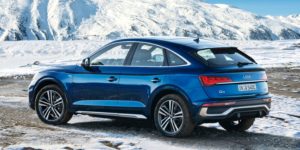 Audi is further expanding its range of plug-in hybrid models. The Q5 TFSI e quattro is getting a new battery, which should increase the electric range. In addition, the Q5 Sportback is also coming in two PHEV variants with immediate effect. The new battery will also be used in the PHEV versions of the A6 and A7.

The Q5 TFSI e quattro has been available since 2019 with a battery with a gross energy content of 14.1 kWh. In the new generation, the battery has an energy content of 17.9 kWh (gross) and 14.4 kWh (net). The Q5, the new PHEV versions of the Q5 Sportback and the A6 and A7 will be equipped with the new power storage system with immediate effect. For the SUV, the electric range is now 61 kilometres according to WLTP, and for the A6 even up to 73 kilometres are said to be possible.

The PHEV versions of the Q5 Sportback SUV coupe are also a new addition: the Q5 Sportback 50 TFSI e quattro offers 220 kW of system power, while the Q5 Sportback 55 TFSI e quattro outputs 270 kW. The powertrain consists of a 2.0-litre four-cylinder gasoline engine with 195 kW output and a permanently excited synchronous machine (PSM) with 105 kW peak output. According to the press release, the hardware of the two variants offered with 220 and 270 kW system output differs only in its boost strategy. In other words, different system outputs and torques result only from the interaction between the combustion engine and the electric motor, which is adjusted differently by software.

In addition, the 220 kW variant is now also available in the A6. The A6 Sedan 50 TFSI e is the variant with the aforementioned 73 kilometers WLTP range. In Germany, this variant starts at 61,790 euros, and in addition to the sedan, the station wagon called Avant is also available.

As is now common with Audi plug-in hybrids, the driver can choose between four operating modes – EV, Hybrid, Hold and Charge. The vehicles always start in EV mode. However, if destination guidance is started, the car switches to hybrid mode and distributes the electric energy along the route – as electrically as possible in urban areas.

Brake recuperation of the e-machine extends to 0.2 g, which should allow up to 80 kW of electrical power to be recovered. With lighter decelerations at 0.1 g, it is still 25 kW, according to Audi.

Despite the battery update, nothing has been changed in the charging system. The AC charging power is still a maximum of 7.4 kW, which means that a charging process should take around 2.5 hours. Audi specifies a charging time of 8:15 hours at a household outlet with 230 volts. A DC charging option is not even available for an additional charge.

Seat announces Cupra Born to release in second half of 2021