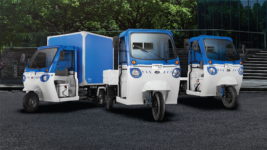 Amazon India has just partnered with Mahindra Electric and has announced they will deploy close to a hundred Mahindra Treo Zor EVs in seven major cities across the country. Amazon’s rival on the e-commerce marketplace in India, Flipkart, has also just announced that they will deploy more than 25,000 electric vehicles by 2030.

Firstly to the world’s largest online retailer, also active in India: Amazon’s partnership with Mahindra Electric is part of its plan to deploy a total of 10,000 electric vehicles in India by 2025. In a joint statement, the two companies said that under the partnership, Amazon India has already deployed close to a hundred Mahindra Treo Zor EVs in seven major cities.

Mahindra’s Treo Zor is an electric three-wheeler delivery mini-truck that has 8 kW of motor power, and a payload of 550 kg. The Treo Zor has so far been deployed in Bengaluru, New Delhi, Hyderabad, Ahmedabad, Bhopal, Indore and Lucknow with Amazon India’s network of delivery service partners.

According to Mint News, Amazon APAC  Vice President Akhil Saxena said: “We continue to work with several OEMs to build a fleet of ‘Made in India’ electric vehicles that ensure sustainable and safe deliveries of customer orders, and this partnership with Mahindra Electric is a testament of our commitment.”

These EVs are in addition to the global commitment of 1,00,000 electric vehicles in the delivery fleet by 2030 announced in the Climate Pledge signed by Amazon. This was prompted by consistent pressure from the group Amazon Employees for Climate Justice. Amazon CEO Jeff Bezos eventually responded positively saying: “We’ve decided to use our size and scale to make a difference,”  adding that Amazon is pushing for other companies to join the pledge.

Apart from pledges to decarbonize the fleets, Flipkart and Amazon India also have an EV manufacturer in common. Flipkart also partnered with Mahindra Electric, along with other EV makers such as Hero Electric and Piaggio to make customized vehicles.

The company has started deploying 450 EVs, both two and three-wheelers, in several cities. Flipkart’s said that its EV fleet will be comprised of two-, three-, and four-wheeled vehicles, and like Amazon India, Flipkart has decided that these are to be designed and assembled in India.

Flipkart says it will also create charging infrastructure at its delivery hubs and offices. Senior Flipkart executive Amitesh Jha said: “Electric mobility can benefit multiple ecosystem stakeholders, not just in e-commerce, but in many other industries.”