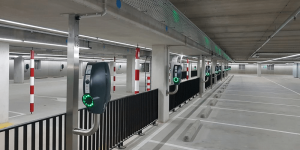 A recent study found that the Netherlands already leads Europe in the expansion of charging infrastructure for electric cars. Despite the head start, the number of charging points in parking garages is to be increased tenfold over the next four years compared to the current level.

This is the target agreed by the Dutch State Secretary for Infrastructure and Water Management, Stientje Van Veldhoven, with an association of 120 parking garage owners, municipalities and industry partners, which has founded a “Platform for Parking in the Netherlands” under the name Vexpan. Currently, there are about 400 parking garages nationwide with an average of 450 parking spaces. However, about two-thirds of these parking garages do not yet have charging points for electric cars.

The specific target that has now been agreed is that there should be a charging station at an average of five per cent of parking spaces by 2025 and at ten per cent of parking spaces in parking garages by 2030. These percentages are based on the estimated total number of charging stations that are likely to be needed in the coming years. The parties involved plan to review every six months to see if the build-out is on schedule.

And the ambitions of the Dutch remain high. This is reflected not only in the parking garage approach specified above, but also in a recently presented initiative according to which at least 14 Dutch municipalities want to introduce zero-emission zones for delivery traffic by 2025. The agenda is also accompanied by a subsidy program for electric utility vehicles: starting March 15, entrepreneurs can apply for up to 5,000 euros in government subsidies for the purchase or lease of electric delivery vehicles. The subsidy program for electric trucks is also to be launched in March.

nltimes.nl, vexpan.nl, rijksoverheid.nl (both in Dutch)