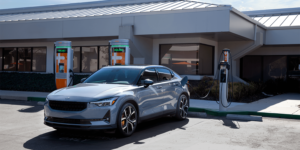 ChargePoint had worked a similar integration together with Apple CarPlay last November. The new in-vehicle integration means drivers can access charging information such as availability and location of charging stations directly via their vehicle’s infotainment system without having to turn to their phones.

Another critical element of the partnership with Polestar is, of course, access to most of ChargePoint’s more than 100,000 charging locations. The company also claims to hold available thousands of additional public charging spots through roaming agreements with other major charging networks in North America.

“We are thrilled to bring our customers access to thousands of charging locations across America, matched with a premium home charger offering for the convenience of always leaving with a full battery,” said Gregor Hembrough, Head of Polestar USA.

Indeed, the partnership includes an offer of the ChargePoint Home Flex home charger. Polestar claims they integrated the charger into a “seamless ordering process”, including installation in line with their direct-sales-only model. The ChargePoint Home Flex delivers up to 50 amps of current, which is adjustable to match any home’s electrical supply today and into the future, so the pitch. Prices start at 699 dollars before potential subsidies.

Polestar sells cars only online, but, like Tesla, runs so-called Polestar Spaces as brick-and-mortar touchpoints for potential clients. The company owned by the Geely Group announced a week ago they would expand the retail presence across the United States with plans to open new Polestar Spaces in 15 cities this year.

The company offers the all-electric Polestar 2 in the US, with the first Polestar Spaces already open in Los Angeles, New York and the Bay area. Prices for the Polestar EV start at 59,900 US dollars, and the battery-electric car qualifies for the federal tax credit.