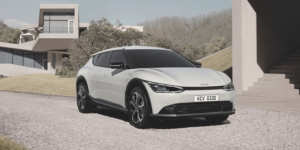 Kia has now shown the first pictures of the exterior and interior design of the EV6. The model announced a few days ago is based on the Electric-Global Modular (E-GMP). Technical details are not yet mentioned, but the world premiere is still promised for March.

For the first E-GMP model, for which Kia had already published the first teasers last week, the Kia designers have taken a completely new direction. The ‘Tiger Nose’ radiator grille that has characterised the front end of most Kia models up to now is no longer to be found on the EV6. The two headlights are now only connected by a simple horizontal element, the lower air intake is also kept quite simple. The most striking feature at the front are the large and redesigned headlights.

The polarising feature is the electric car’s rear view. The continuous red light band runs from the rear wheel arches across the entire width of the vehicle. It slopes down towards the wheel arches on both sides. In the middle of the boot lid, the light band seems to be integrated into the tear-off edge. The side view is characterised by the rising window line and the slightly sloping roof, and the door handles are integrated flush with the surface, as on the Hyundai Ioniq 5.

While Hyundai designers indicated at the presentation of the Ioniq 5 that each model based on the E-GMP is to be given its very own character and that the angularly designed Ioniq 5 is not a template for the upcoming model series, design elements of the EV6 could probably appear on further Kia electric cars.

The Korean company says that the EV6 has been designed according to the new design philosophy ‘Opposites United’. The design “takes inspiration from the contrasts found in nature and humanity,” Kia says. “At the center of the design philosophy is a new visual identity evoking positive forces and natural energy, with contrasting combinations of sharp stylistic elements and sculptural shapes”

We strongly believe EV6 is a compelling and relevant model for the new EV market,” said Karim Habib, Senior Vice President and Head of Global Design Center. “With EV6 we aimed to create a distinctive, impactful design by using a combination of sophisticated, high-tech features on pure and rich volumes while providing a unique space as a futuristic EV.”

Inside, just like the Ioniq 5, the EV6 relies on two side-by-side displays. Below the infotainment display is a bar of buttons for some basic climate control functions. While Kia, like Hyundai, has opted for a rather unusually designed two-spoke steering wheel, the Kia appears to have a continuous centre console. Hyundai has famously opted for a different approach here.

Kia does not provide any information on the electric car’s technical details with the reveal of the EV6 design. At the moment only the reference point here is the known key data of the Ioniq 5, which is offered with two battery sizes (58 and 73 kWh), each of the batteries is available with rear- and all-wheel drive. The drive power is between 125 and 225 kW. With its 800-volt architecture, the Ioniq 5 is said to be able to charge batteries from 10 to 80 per cent in 18 minutes. Kia says that more will be revealed when the EV6 has its world premiere in the next two weeks with a special online event.

Mini to be an all-electric brand by 2030