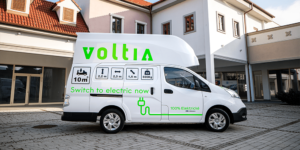 Voltia is introducing an extra-large version of the Nissan e-NV200 electric transporter. The XL variant will hold a 10-cubic-metre cargo space. Manufacturing is set to begin in Slovakia, with partner plants in the UK and France to join later. There is also a first customer.

DPD Slovakia already used the new model in a pilot project. Compared to the standard 8-cubic-metre model, which Nissan adopted into its official
European line-up last year, Voltia’s new XL van version is 28 cm taller and offers 2.2 instead of 1.9 metres of height while maintaining the same vehicle width and payload of 580 kilograms.

Voltia claims there to be enough space to load three euro pallets. Simultaneously, cargo capacity is achieved in part by the 1.35-metre-deep compartment above the driver’s cab. The raised body makes the ten-cubic-meter version 2.70 metres high.

The city traffic range remains similar to the standard model’s: over 200 km despite the larger cargo space. Voltia also left the drive system of the Nissan e-NV200 unchanged. The motor output is 80 kW, the battery has an energy content of 40 kWh – charge with up to 6.6 kW AC via type 1 connection or CHAdeMO with direct current.

Voltia is a conversion specialist from Slovakia. Their initial XL version of the Nissan e-NV200 van is also available through official Nissan dealers since May 2020. The first version saw Voltia lengthening the body and loading area towards the rear, already making the roof behind the driver’s cab considerably higher. The XL version of the e-NV200 with eight cubic metres has a loading space twice as large as the basic model. The new 10-m3 version adds more space once more.

With production ready to go in Slovakia, plants in the UK and France may start manufacturing the van later. Voltia has yet to publish pricing but found the first customer in DPD Slovakia. DPD delivered more than 2,000 parcels during a three-week-trial and drove more than 1,000 kilometres, DPD said.

Thus, Peter Pavuk, CEO of DPD Slovakia, found the Nissan e-NV200 XL van from Voltia particularly suitable for city logistics. “Compared to the six- and eight-cubic-meter versions, this vehicle is optimal for us because of delivery volume, range and greater emissions savings per parcel,” the executive added.