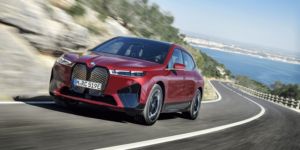 BMW has announced the German prices and technical specifications of the two versions of its iX electric SUV. The iX xDrive40 and iX xDrive50 variants will be launching in Germany by the end of 2021 with prices starting at 77,300 euros.

The fact that BMW is betting heavily on its new “technological flagship” was already clear at the presentation in November 2020. Even now, the Munich-based company insists that the iX will “redefine the successful vehicle concept of the Sports Activity Vehicle,” and particularly so in the direction of sustainability.

With a base price of 77,300 euros for the iX xDrive40, the customer group will be smaller than for a mid-range model. The ‘xDrive’ designation, familiar from BMW combustion models, reveals that the basic version of the iX also features an all-wheel-drive system. The ’40’ is supposed to place the variant on a similar level to the combustion engine models since the models with the three-litre in-line six-cylinder are currently mainly sold with the ’40’ designation.

Translated into the electric world, this means a system output of 240 kW. BMW has not yet revealed the output of the two motors on the front and rear axles. With this drive, the iX xDrive40 should accelerate from a standstill to 100 kph in less than six seconds. Consumption is said to be 20.0 kWh/100km according to WLTP.

As far as the battery is concerned, BMW so far only says that the power storage should have “a gross energy content of more than 70 kWh”. The range is said to be “more than 400 kilometres” and it should be kept in mind that, as with acceleration and consumption figures, this is a BMW forecast, not an officially determined value.

With the smaller battery, the DC charging power is up to 150 kW, which means that 90 kilometres of electricity can be recharged in ten minutes. The charging process from 10 to 80 per cent should take less than 40 minutes.

In the iX xDrive50, (the number used for the V8 models in the combustion models), all of the performance data come in somewhat higher. The system output is 370 kW, the sprint to 100 km/h is said to take less than 5.0 seconds. Because of the larger and heavier battery, the WLTP consumption is 21.0 kWh/100km. BMW already mentioned some of these data at the design premiere.

The battery is said to have a gross energy content of “more than 100 kWh”. According to information from our German colleagues electrive.net, the usable energy content will also be in triple figures. As our colleagues learned from BMW insiders, the production model will have 106 kWh. BMW gives the estimated standard range as more than 600 kilometres.

Charging with the large battery takes place at a maximum of 200 kW, which means it should be possible to charge enough power for 120 kilometres in ten minutes, and the charging process from 10 to 80 per cent should also take less than 40 minutes. If the 106 kWh net energy content is correct, 74.2 kWh would be charged in this range. With a duration of 40 minutes, this would correspond to an average of 111 kW charging power. That being said, since the 106 kWh is not yet confirmed and the charging time may also be less with the formulation “in less than 40 minutes”, this calculated value of 111 kW is not particularly reliable.

The more certain data concerns the basic prices for both versions: The iX xDrive 40 is listed at the aforementioned 77,300 euros and is thus, according to sales director Pieter Nota, “at the price level of a comparable BMW X5 with a conventional combustion engine”. The current top model of the series is listed at 98,000 euros. According to BMW, prices have not yet been set for other countries.

According to earlier reports, BMW is planning a total of three power stages, whereby a version with 455 kW was mentioned. The other two engine versions were said to have 230 and 390 kW but now these are now figured at 240 and 370 kW.

The iX will also introduce ‘Functions on Demand’ for the first time, but without specifying exactly which functions. “Our customers will benefit for the first time from additional offers for vehicle functions that can be booked later, as well as from a seamless and particularly customer-oriented configuration process with personalised offers,” says Nota.

As with the BMW i4 that is also due to be launched this year, the iX benefits from the German carmaker’s new procurement policy: BMW buys raw materials such as cobalt and lithium directly from mines in Australia and Morocco. The production of the cells at the partner companies and also the production of the iX itself at the Dingolfing plant is to be carried out exclusively with green electricity. The new generation of electric motors also does without rare earth metals. In future, the electric motor, gearbox and power electronics will be arranged in one housing.