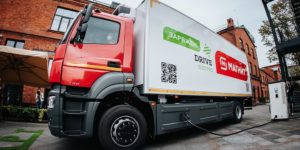 A few months ago, Drive Electro had presented the prototype of its first electric truck called Moskva, which was developed for a Russian food retailer. It is a fully-electric distribution truck with nine tonnes and 200 kilometres of range. The company expects to sign its first firm purchase contract with the retailer for a batch of 200 vehicles after the end of the test phase, according to the latest announcement.

Drive Electro plans to sell its electric trucks not only in Russia, but also abroad. However, details about the other markets or the planned distribution network are not yet given.

The Moscow-based company’s plant already produces lithium titanate batteries for electric buses. Drive Electro said it had already supplied the batteries for 400 of the 600 electric buses in Moscow by the end of 2020 – the vehicles themselves are built by GAZ or Kamaz.

The plant should be able to build between 700 and 1,000 battery packs for electric buses. The company does not state how high the production capacity of the battery manufacturing plant was before the expansion. In the future, up to 1,000 e-trucks are to be built there, but at the start of production the number of units is to be significantly lower.

In addition to the vehicle, Drive Electro also offers a suitable charging station as well as monitoring software that is supposed to be able to control the battery remotely. The company also uses this software to be able to detect a need for maintenance at an early stage.