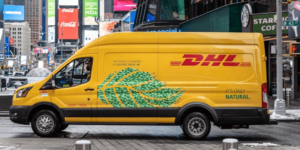 DHL Express says the deployment supports the newly launched sustainability roadmap launched this week by Deutsche Post DHL Group. This accelerated roadmap to decarbonization includes investing a total of 7 billion euros (Opex and Capex) over the next ten years in measures to reduce its CO2 emissions.

The new electric vehicles from Lightning eMotors are capable of achieving 61 MPGe, compared to 13 MPG for similar gas-powered vans. Lightning EVs are based on Ford and Chevrolet chassis converted to all-electric while maintaining the standard warranty. The CEO of Lightning eMotors, Tim Reeser, says: “These new electric vans are designed to better serve DHL customers and help couriers to more efficiently and effectively deliver packages.”

Lightning eMotors manufactures electric vehicles for commercial fleet use, including cargo and passenger vans, shuttle buses, ambulances, school buses and RVs. With an agreement for commercial vehicle batteries just concluded with Proterra, the company expects to produce up to 3,000 vehicles annually by 2023. In 2020 the company changed its name from Lightning Systems to Lightning eMotors and ramped up production by more than 600 per cent. The company also recently doubled its workforce and expects to double it again this year.

DHL Express is part of the Deutsche Post DHL Group that employs around 570,000 people in 220 countries and territories worldwide. The Group is involved in several initiatives such as the UN Sustainable Development Goals, the Climate Group’s EV100 initiative and the Science-Based Target initiative (SBTi). The latter see Deutsche Post DHL Group pledging to reduce its greenhouse gas emissions by 2030 in line with the Paris Climate Agreement.