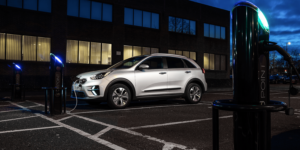 Kia Motors UK has introduced a new mid-rung variant of its e-Niro EV which makes the 64kWh range-topping battery pack available in the sub-£35,000 price bracket. The e-Niro ‘2’ Long Range is now available to order, with deliveries expected to launch in July.

The move to establish a new price class is a reaction to the recently revised subsidy programme, which lowered the maximum cost for vehicles eligible for subsidies. Next to lowering the general subsidy by £500, it also lowered the price cap for eligible electric cars by £15,000 from £50,000 to £35,000. This way, the new vehicle is eligible, but Kia can keep a range-topping model for wealthier customers.

While the price has been updated, the technology remains familiar, as the new e-Niro ‘2’ Long Range features the same 64kWh battery pack and high-power 150kW motor as the higher-priced model. The range for the new model is set at 282 miles on a single charge, according to WLTP standards, and up to 382 miles in city driving. In terms of driving speed, the vehicle can manage acceleration from  0-62mph in 7.8 seconds and features a top speed of 108mph.

Coupled with the new model release, Kia also announced that e-Niro drivers will be eligible for the ‘KiaCharge’ charging network. The UK-wide integrated public charging service is advertised as providing easier, comprehensive access to the UK public charging network for owners of the brand’s plug-in vehicles. The app enables access to more than 15,000 charge points across the UK from a single account, including bp pulse, Pod Point, IONITY, Source London, Chargepoint, NewMotion, Char-gy, and ESB. Apparently, certain national and regional charging networks are also accessible via KiaCharge.

Kia also boasts the success of the vehicle model, which was the UK’s best-selling battery EV during the first two months of 2021, accounting for almost one in five of all nationwide EV sales up to the end of February, according to Kia.