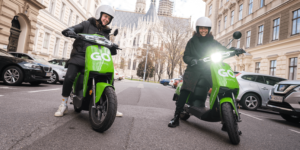 The young Dutch e-scooter provider Go Sharing announces plans to offer its services outside the Netherlands as the start-up launches in Vienna. The Austrian capital now has 200 e-scooters available to use in a pay-as-you-go model.

Go Sharing only launched in 2019 in the Netherlands and has since covered the small country with scooters in all major and not so major cities. The fleet comprises 4,000 e-mopeds in 30 locations. The step into Vienna is a first. Go Sharing says it saw a similar challenge in Austria as in the Netherlands, namely traffic, congestion and pollution.

So far, so not new. Go Sharing declares “lofty ambitions” indeed followed by the motto “A green planet with mobility owned by everyone, shared by everyone.” Nice for a mission statement but a long way to go. Still, CEO Raymon Pouwels was “incredibly proud of the fact that, as of today, our service is available in Vienna as well. This is the first step towards fulfilling our goals,” he added.

At present, Go Sharing focuses on shared e-mopeds, “but we hope to someday make all forms of transport a shared service,” says Pouwels.

The Go Sharing scooters all come in green. The vehicles have a top speed of 45 kph so that anyone with a valid driver’s license (AM or B) can use the GO Sharing app to book a ride. All mopeds are equipped with two mandatory helmets. The shared e-mopeds are available 24/7 at a starting rate of €0.23 per minute, says Go Sharing. The company did not disclose the make of the models or range estimates.

Go Sharing was founded in 2019 with an investment of ten million euros so far. It claims having won 350,000 users in 30 municipalities.