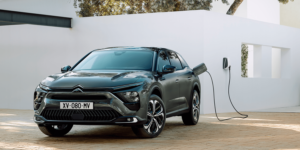 Citroën is reviving its C5 as the crossover model C5 X. The Citroën C5 X is based on the EMP2 platform and will also be launched as a PHEV. Speculation about a battery-electric version hints at a later date.

When it comes to the C5 X body, the French company is following a similar path to the compact model C4 and its electric derivative ë-C4: here, the conventional mid-size model that was offered in Europe as a sedan and station wagon until 2017 will now become a crossover. Citroën itself speaks of the “elegance of a saloon, the dynamics of an estate and the raised body shape of an SUV”.

The new C5 will then only be available in this one body shape as a crossover with the addition of the name ‘X’. The front is reminiscent of the C4 design, while the side view of the C5 X could pass for a slightly higher off-road estate. For the real utility value of an estate car, however, the rear window drops flat very early. With 545 litres according to the VDA standard, the boot is quite large, but the VDA standard only measures up to the edge of the window. With the rear seat folded down, the load volume is 1,640 litres. The C5 X is not intended to be a “true” SUV, as the C5 Aircross (also as a PHEV) is already offered here.

Unlike the C4/ë-C4, which is based on the CMP platform, the C5 X is based on the EMP2 from PSA/Stellantis. Theoretically, electric drives would also be possible here, but PSA has so far only used this option for its vans such as the Opel Zafira-e Life and its siblings. The C5 X is therefore more comparable to SUV models such as the Opel Grandland X Hybrid or the Peugeot 508 sedan. Auto, Motor und Sport, however, is already speculating about a ë-C5 X – although this would probably not use the familiar 100 kW drive of the e-CMP, but would be based on the new eVMP for vehicles in the C and D segments. This has not yet been confirmed.

The details confirmed so far are that the PHEV drive of the EMP2 offers a system output of 165 kW and “more than 50 kilometres” purely electric WLTP range. The electric top speed is 135 km/h. In this configuration, the combustion engine produces 133 kW, the electric motor 81 kW. The battery has an energy content of 12.4 kWh.

The French company is reticent about revealing further technical data on the drive. Should the C5 X correspond to its sister models (such as the recently presented Peugeot 308), a 3.7 kW onboard charger would be installed ex-works, a 7.4 kW charger is optionally available. With the latter, a full charge takes a little less than two hours, with the standard 3.7 kW charger it is 3:50 hours. Peugeot quotes 7:05 hours for a full charge at a standard 8 amp socket. There is no optional DC charging option.

With the C5 X, Citroën wants to score with the design, the body concept and the comfort. The French carmaker emphasises the comfortable seats in the spacious interior, the ‘Advanced Comfort’ suspension (designed as an active suspension in the PHEV) and features such as the assistants and the large head-up display. “With C5 X, we wanted to provide an emotional and rational response to D-segment customers looking for modernity, refinement, comfort and versatility,” says Laurence Hansen, Director Product & Strategy. “With its unique body style, increased comfort, its plug-in hybrid engine and innovations, C5 X offers pleasure and peace of mind in a true Citroën way.”

Citroën has not yet provided market launch dates or prices.