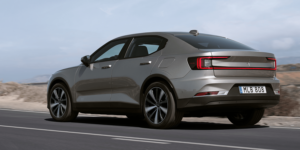 Polestar is expanding the range for its purely electric hatchback Polestar 2. Three drive trains are now available. In addition to the already available dual-motor drive with 300 kW output and a 78 kWh battery, there are now also two variants with front-wheel-drive.

One model uses the 78 kWh battery known from the all-wheel-drive version, which is now called “Long Range”. The electric motor here has an output of 170 kW, and Polestar gives a preliminary WLTP range of 515 to 540 kilometres.

In addition, there is a version with a smaller 64 kWh battery (Standard Range) in combination with a 165 kW engine. The provisional WLTP range here is 420 to 400 kilometres. As a reminder: Polestar quotes 450 to 480 kilometres for the previously available Long Range Dual Motor. The standard consumption figures for the new Singe Motor models are 17.1-18.3 kWh/100km with the Long Range battery and 17.1-18.0 kWh/100km with the Standard Range model.

The combination of standard range battery and dual motor is not currently offered – two motors are only available with the 78 kWh battery, as with the previous Launch model. But there is also a change in the configurator for the Long Range Dual Motor: the previously standard “Plus” and “Pilot” packages are now optional. This also lowers the entry-level price for the all-wheel-drive model.

The pricing of the Polestar 2 is now staggered as follows: The base price for the standard range single-engine is £39,900. This stands just above the £35,000 cut-off base for EV subsidies in the UK, following the adjusted PiCG, making the vehicle ineligible for the grant. The long-range battery costs £42,900. The second electric motor costs another £3,000 extra, so the all-wheel-drive model is available at £45,900.

Prices for the USA and Canada have not been announced yet, but is expected to be confirmed in the next weeks.

In addition to the drive variants and equipment packages, a few individual options are available – such as a metallic paint finish (standard colour is black), 20-inch wheels (19 inches are standard) or ventilated seats in Nappa leather (Plus package required). In addition, the semi-electric trailer hitch (1.5 tonne towing capacity) is still available.

With the two new drive variants, Polestar has thus also introduced the previously unavailable heat pump. The manufacturer states that it can be used to gain up to 10 per cent range in colder climates: the most effective temperature range is between 5 and 15 degrees outside. Further improvements could be introduced via OTA updates.

The new variants can be ordered now, first deliveries of the front-wheel-drive models are planned from September 2021.