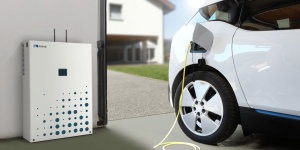 Honda launched a new home charging service that allows electric car drivers to charge at the cheapest time in the UK. The e:Progress service combines a connected home charger with a dynamic energy tariff from Octopus Energy.

Honda says that users could save up to £475 per year compared to a standard tariff. For e:Progress, a service first announced last year, the charger uses software developed by Moixa, of which Honda is a leading shareholder. The company’s software takes into account the owner’s charging requirements as well as energy prices. Customers can also enter individual parameters (such as the planned departure time and the desired charge level) via a smartphone app, and the software then regulates the charging process accordingly.

Jørgen Pluym, general manager of Honda’s Energy Solutions division, found the introduction of e:Progress in the UK “a significant statement of Honda’s ambition in the provision of energy solutions as part of the continued move towards electrification and the widespread adoption of electric vehicles.”

Honda has indeed made advances in smart charging as the Japanese company is gearing up for bi-directional (V2G) charging capability via CCS for its Honda e vehicle as reported. Accordingly, the new tariff will support “active grid management to help stabilise demand and to optimise the use of renewables,” says Honda.

The e:Progress offer is exclusive to Honda e customers in the UK at present. The company said further services under the new brand would follow in Germany, with other European countries under consideration.

The Honda e is so far the only electric car in the manufacturer’s line-up despite a strategy change in 2019 which saw the company bring forward plans to electrify its EU sales by three years. Only sales appeared to be insufficient as Honda joined a CO2 pool by Tesla and FCA in the EU last November. There were around 1,000 units of the Honda e registered in Western Europe in 2020, equivalent to around two per cent of all Honda registrations.