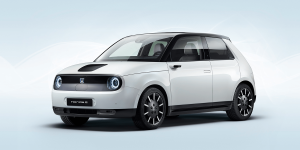 Honda has joined the CO2 pool of Tesla and Fiat Chrysler Automobiles (FCA) in the EU, according to an official document from the European Commission. The Honda e registrations appear insufficient to reduce Honda’s overall fleet emissions.

Schmidt Automotive Research first broke the story. According to the document, only around 1,000 units of the Honda e were registered in Western Europe this year, equivalent to around two per cent of all Honda registrations. This means that sales of the small electric car and the resulting super credits are insufficient to reduce Honda’s CO2 fleet emissions enough for the Japanese company to avoid EU fines. Hence now the connection to the pool of FCA and Tesla, which was founded in 2019.

In addition, Schmidt Automotive Research expects Tesla to be able to increase its registrations significantly in the fourth quarter, partly because of the start of deliveries of the Model 3 from Chinese production. This could also ease the burden on US production of the other variants. In the first three quarters, Tesla was already 16 per cent above the previous year’s registrations in the EU. In addition, FCA “needs a little less help than previously expected” with the “PHEV push” on the small Jeep models Renegade and Compass and with the new Fiat 500. A CO2 volume that would thus be free for Honda.


The conditions under which Honda joined the CO2 pool are not known. With FCA as a pool partner alone, Tesla has raised almost one billion euros this year. The income from the CO2 pool has thus made a very significant contribution to Tesla’s profitability: In the first three quarters, profits amounted to a cumulative 451 million dollars, or 387 million euros.

It was announced last weekend that Ford is forming a CO2 pool in the passenger car sector with Volvo and Polestar. The Swedish company had previously announced that they would exceed their CO2 target this year. Besides, Volkswagen has formed a CO2 pool with its daughters Skoda, Seat, Porsche, Bugatti and Audi in a CO2 pool with SAIC and its subsidiary MG. Toyota and Mazda will also form a CO2 pool in 2020. Renault alone is currently still forming a CO2 pool and offers its contingents to other car manufacturers. LEVC has now withdrawn its offer also to form a CO2 pool.