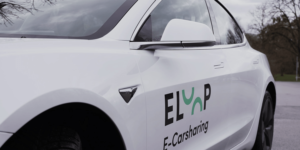 Vienna’s exclusive electric car-sharing Eloop is gearing up for growth. New investors pumped a seven-digit sum into the small business to include more Tesla cars into the fleet. Expansion across the DACH region is also on the cards.

ELoop is one of the few smaller players in the sharing space. The company adopted an EV-only approach at launch in August 2019 and focussed exclusively on its hometown Vienna. Aimo in Stockholm and InnogyGo! in Warsaw took a similar approach. Only now things are changing and Eloop is rapidly expanding.

The company has announced that Austrian investors C&P Immobilien AG (usually invests in retail locations) and the European Super Angels Club have come onboard. The only information available so far reveals only investment is in the 7-digit range.

Eloop wants to spend the funds on the fleet first. Plans include purchasing 200 Tesla Model 3 to join the existing 70 Tesla cars. The company also offers the BMW i3, Renault Zoe and Smart EQ and says it has 15,000 registered users in Austria’s capital.

Later this year, ELoop hopes to add one major German city to the service and look at Munich, Hamburg or Berlin. Leroy Hofer, CEO and co-founder of Eloop, also pointed to the know-how that investor C&P AG brings since the company has recently expanded to Germany. He also pointed out that it is advantageous that the fund from the investor network European Super Angels Club is managed by Venionaire Ventures Sárl, a partner with a “strong network in the crypto, tech and startup scene.” Eloop is already using a so-called crypto token, which allows revenue sharing on car sharing income.

Drivers in Vienna can rent a Tesla Model 3 for 16.56 euros in the first hour; each additional hour costs 15.44 euros. Eloop also charges by the minute at 54 cents for a Tesla and 33 cents for a smaller car but generally promotes longer drives. Frequent drivers who purchase an annual subscription for 99 euros receive a ten per cent discount. Alternatively, users can book a daily flat rate with a kilometre limit. The startup also plans to introduce a B2B offer for companies in the coming weeks.

As Hofer underlined in an interview with Trending Topics, that Eloop aims to replace private cars, not public transport. The electric car-sharing service is free-floating and drivers can park anywhere in a service zone for free.