Our findings rely on a recently published report by shared mobility expert Augustin Friedel, who also works on the Volkswagen Group’s multimodality strategy. His insights in the car-sharing sector build the base for us to examine e-mobility developments in particular. While smaller players are driving innovation through conviction, larger contexts are also pushing OEMs forward.

Across the European free-floating car-sharing landscape, we can see that services adding electric cars to their fleet can be found all across the continent. The sector hosts a mix of both local players and global OEMs. Our analysis shows that overall, about 45 per cent of car-sharing providers in Europe already operate a 100% electric fleet and that this trend is increasing.

The reasons for car-sharing services to adopt electric cars vary. Experts argue that EV sharing paves the way for private EV adoption, which is an argument OEMs are more amenable to. Other concerns revolve around enforced regulation like low emission zones in cities, while smaller players are often driven by conviction. Take for example Aimo (Stockholm), InnogyGo! (Warsaw), or ELoop (Vienna), who all started off by rolling out electric-cars-only fleets in their hometowns.

Multi-city OEM financed services either go fully electric across multiple cities or increase the overall share of electric vehicles across their fleet operation. At the same time, there are still approximately 35% of car-sharers that don’t have any zero-emission cars at all, while 20% of providers operate a mixed fleet of EVs and ICEs.

The European tendency towards electrification is currently concentrated in a number of hotspots. Paris and Madrid have the largest electric car-sharing fleets in Europe. In each capital, different players have deployed a total of about 1,800 electric vehicles.

If we have a look at a single provider, Share Now, we see the joint venture from BMW and Daimler that merged car2go and DriveNow. Share Now has the largest EV fleet in Europe so far with 3,030 e-cars deployed across 15 markets (not counting London where the service is being wound down). Four of these markets can boast a fully electric Share Now fleet, namely Stuttgart, Paris Amsterdam and Madrid. The remaining cities in the mix are Milan, Vienna, Berlin, Hamburg, Munich, Copenhagen, Rhineland, Helsinki, Budapest and Lisbon, whereby these cities have a varying EV share, ranging from 2% (Milan) to 45% (Copenhagen). Overall, Share Now is en route to increase the number to at least 4,000 electric vehicles. 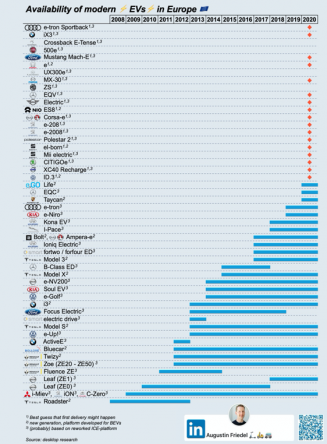 The car-sharing provider WeShare from Volkswagen and Skoda currently operates the biggest fleet of EVs in one market. WeShare deployed 1,500 e-Golfs in Berlin and has plans for ramping up the service to eight cities in total in 2020, including Paris and Madrid but also Budapest, Munich or Milan. The fleet would then amount to around 8,400 electric vehicles in total.

EV models most in use in car-sharing

The availability of electric vehicle models for car-sharing has been limited over the last few years. But now, the incoming generation of electric cars with higher ranges and better sharing capabilities will bring more choices to operators and car-sharing users alike.

Although OEMs will release around 20 new EV models in 2020 in Europe, not all of them will be suitable for car-sharing services. Generally, smaller models with an increased range, like the Skoda CitigoE, Peugeot e-208 or the Honda e seem to be the most appealing cars for city shared mobility offers.

There are some models that are consistently popular for in car-sharing fleets. The ‘veteran’ of the EV models used for sharing is the Mitsubishi iMiev that is also sold as Peugeot iOn and Citroen C-Zero. The model has been on the market for more than ten years already and still is in use by providers like emov (750 vehicles in total in Madrid and Lisbon) or Free2Move (500 cars). Also Multicity offered 250 of the vehicles in Berlin before the service ceased in 2017.

Another common sharing model is BMW’s i3, which can be found in the fleets of Share Now and smaller players like ELoop in Vienna or Innogy Go! (500 vehicles) in Poland. Sixt Share recently announced to add also i3 EVs to the fleets in Berlin, Hamburg and Munich. Besides, Share Now uses Smart EQ models in cities like Paris (800 vehicles) or Stuttgart (500 vehicles). ELoop also deployed some of the Smart two-seaters in Vienna, and MOL LIMO is offering the smart EQ fortwo and forfour in Budapest.

The Renault Zoe is the vehicle of choice for many providers, due to its excellent availability and pricing. Renault uses it, of course, but also smaller players like GreenMobility (400 EVs in Copenhagen and 200 in Oslo) or Aimo (500 EVs in Stockholm) have built their service around the Renault Zoe. Sixt share is also offering the model in three German cities.

So far, VW is providing one EV for use on their car-sharing platform and has deployed the e-Golf at WeShare in Berlin. In coming months, the e-Up! and later also the ID.3 will be added to the fleet as WeShare expands its service. For external providers, MOL Limo is using a few e-Up! in Budapest and Poppy Mobility has eGolf vehicles in Amsterdam and Antwerp.

The availability of vehicles is not the only driver of the electrification trend in urban transport. Cities are under pressure to improve air quality within urban areas, which of course means using zero-emissions vehicles. Since it is difficult for municipalities to regulate private car ownership, the short-term focus has shifted to encouraging shared mobility. A number of cities already have regulations in place or are working some, to make shared mobility providers reduce CO2 emissions across fleets.

Car-sharing providers are also proactively complying with increasingly strict emissions regulations because they want to secure long-term access to city centres. Madrid has banned ICEs from crossing the inner city area and is now only accessible for electric cars and hybrids with an electric range of more than 40 km. This is one of the reasons why the city has become an EV sharing hotspot. Among the first to react was Wible, a JV from Kia and energy company Repsol, that operates a fleet of 500 plug-in hybrids in the Spanish capital. Also Zitty, Emov and Share Now are offering EVs. 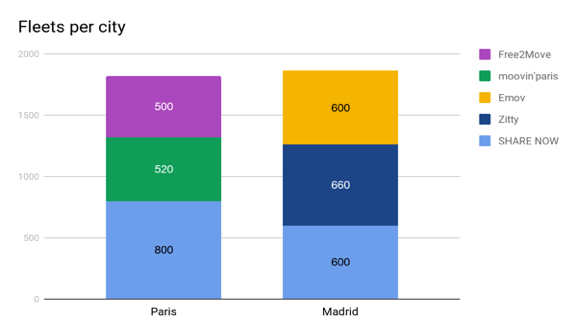 Whether it is enforced or not, operating with EVs and not a 100% ICE fleet also represents a more viable business case because of a number of other regulations. Where cities like Hamburg provide free on-street parking or reduced parking fees for electric cars, for example, car-sharing providers are more than happy to make use of this opportunity because it directly affects their costs and therefore income. However, some city authorities have also made use of specific deals for shared fleet operators. Paris is offering between 15-20% off parking permits for electric car-sharing providers.

Charging as a challenge for shared EV fleets

Moving into new fields has its problems. Charging of large EV fleets is one of the challenges platform operators have to cope with. Here, providers rely on two to three different pillars. In cities like Berlin or Paris, the public charging infrastructure is an integral part of the setup for charging the vehicles within the business area.

A second pillar is a partnership with other private companies that install and operate charging infrastructure. WeShare, for example, announced a strategic alliance with Schwarz Group, which owns retailers like Lidl or Kaufland. Both chains are rolling out charging stations on their parking lots, which customers can use during business hours – while the e-car-sharing provider will utilise the chargers at night.

Moov’in from Renault took a similar approach in Paris by partnering with a company called ADA for operations and charging. The vehicles will be either charged at public charging points or at charging infrastructure set up at the premises of the cooperation. ADA is a leading rental car provider in France, with multiple hubs and branches in and around Paris.

While the trend towards electric vehicles increases, cars are, of course, not the only electric vehicles that make good sharing vehicles. While the bigger players like Share Now and WeShare focus on providing cars per minute, smaller, local companies like Poppy in Belgium or Aimo in Sweden are showing a more innovative approach by also adding electric two-wheelers to their fleets. Poppy deployed a fleet of electric mopeds and kick-scooters in Antwerp and Brussels that users book through the same app as the car-sharing service. Recently, Denmark’s all-electric car-sharing provider GreenMobility also announced plans to launch 400 electric vehicles in Vienna. GreenMobility has signed a letter of intent with the Austrian Automobile, Motorcycle and Touring Club to merge with the latter’s e-scooter sharing service in the Austrian capital.

The first data collected shows that a multimodal fleet has synergies on user growth and user activity. Friedel’s report shows that the activity of users increased by up to 30% for providers like Aimo or Poppy. In general, users play a significant role on the road to larger EV fleets. Reasons for this include an increase in environmental awareness and the positive reception of electric cars when used for marketing car-sharing fleet electrification.

>> You can download Augustin Friedel’s full report as pdf from dropbox.

Solaris plans to deliver more than 500 electric buses in 2020