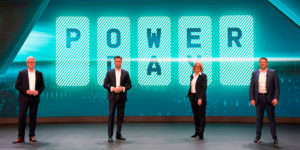 Volkswagen has just presented its technology roadmap for the battery and charging sectors up to 2030 at its Power Day presentation. The aim of the roadmap is to significantly reduce the complexity and costs of batteries. At the core of the plan are six “Gigafactories” throughout Europe.

With Volkswagen’s battery plans, complexity and costs are to be achieved primarily through a new, uniform battery cell, as the German carmaker explained at its Power Day event that lasted several hours. Although this cell has a uniform format, it can contain different cell chemistries that are adapted to the respective vehicle. Here, VW is relying on a prismatic cell.

This standardised battery cell is to be installed in up to 80 per cent of all the group’s electric vehicles by 2030. “For the remaining 20 per cent, a large manufacturer like Volkswagen needs specially adapted cells from suppliers,” says VW technical director Thomas Schmall at the Power Day. “But it is important that we use the same cell for 80 per cent. With this 80 per cent, we will then succeed in achieving the cost targets.”

The costs are to be reduced by 30 per cent on average, and even by up to 50 per cent for smaller vehicles. There is a simple reason why the savings are greater for entry-level BEVs: similar to Tesla’s announcement at Battery Day in September 2020, Volkswagen also wants to rely on LFP cells for its volume models in future. “These cells are cheap and robust, they can withstand many charging cycles,” says Frank Blome, head of the Center of Excellence Battery Cell. “This makes them very promising for vehicles with short ranges.”
LFP for entry-level BEVs, solid-state as the “ultimate goal”

Volkswagen figures that in terms of cost reductions, up to 15 per cent is to be saved in the cell design itself, up to ten per cent in production, five per cent in the battery system and up to 20 per cent in material costs for the anode and cathode – adding up to the targeted 50 per cent savings in comparison to the current cell generation. The “consistent recycling”, starting from the pilot plant opened in Salzgitter in January, should also contribute to the cost savings in the long term – 95 per cent of the materials should be able to be reused.

“We will also use our economies of scale for the benefit of customers in the battery,” says Schmall. “On average, we will thus reduce the cost of battery systems to well below 100 euros per kilowatt-hour. This will finally make e-mobility affordable.”

Cells with a high manganese or nickel content are to be used for the larger and more powerful series of the Group brands, but the nickel-rich cathodes are likely to be used for premium brands because of the higher material costs. Battery expert Blome described solid-state batteries as the “ultimate goal”, which should then enable charging to 80 per cent in 12 minutes.

According to Blome, the solid-state batteries should not only enable shorter charging times for customers (on the 450 kilometres from Leipzig to Munich only 12 minutes charging should be required), but with their simpler construction they should also contribute to cost reduction – and also to a lower weight of the vehicles. The cathode alone in the 77-kWh battery of the ID.3 weighs around 100 kilograms. “We can then do without this weight,” says Blome. The proof-of-concept of the technology from partner Quantum Scape is there, but there are still some hurdles on the way to industrialisation – the battery expert did not go into detail here.


Porsche wants to take a special path with battery cells. The Porsche Taycan and the recently presented sister model Audi e-tron GT already have cells with a silicon-based anode instead of the usual graphite. As Porsche CEO Oliver Blume explained in his appearance at the Power Day, the brand will continue to build up expertise in high-performance cells, both for road sports cars and motorsport. According to Blume, Porsche will work on new materials, but also on more efficient cooling solutions.

According to Schmall, the board member responsible for technology, a new paradigm will apply to development across all brands: “Until now, we designed the vehicles and then developed the battery for them,” says Schmall. “Now the battery will be defined upfront and the car will be developed around it.” A common approach for a technology startup, but a big change for a previously vehicle-focused group like Volkswagen.

Since the company recently significantly increased its electric targets for 2030, with 70 per cent of sales to be purely electric cars this year, the demand for battery cells will naturally also see an enormous increase. Until now, the Group was aiming for about 150 GWh by 2030. Schmall now corrected this figure upwards: The VW Group alone will need 240 GWh of cells by 2030 – and wants to cover this demand with six European gigafactories, each with an annual output of 40 GWh. “By 2030, we want to start up a total of six cell factories in Europe together with partners and thus guarantee security of supply,” says Schmall.

VW plans six 40 GWh factories just for its own vehicles

VW is not aiming to operate all six of these battery cell factories itself – at least not alone. The first of these 40 GWh factories is to be built at Northvolt in Skellefteå, Sweden. So far, the factory there is designed for 14 GWh, but it is to be enlarged beyond the 32 GWh planned by Northvolt and apparently produce exclusively for the VW Group. Northvolt has also concluded supply agreements with other carmakers, including BMW. According to Schmall, production is to start there in 2023 and primarily produce the unit cell for premium vehicles.

As Northvolt states in its own announcement, the new order from Volkswagen is worth 14 billion dollars, currently around 11.75 billion euros. Volkswagen says it will also increase its share in Northvolt but have not yet revealed how much this will be. In 2019, the German carmaking giant took out a 20 per cent stake in the Swedish company.

The second 40 GWh factory is to be built in Salzgitter. Previously, 16 GWh were planned there, which would later be expanded to 24 GWh – also part of the 2019 deal with Northvolt. However, the Swedish company has now revealed that VW will operate the Salzgitter plant on its own. “As the Volkswagen Group plans to increase its own battery production in Europe, Northvolt will sell its share in the Northvolt Zwei joint venture in Salzgitter to Volkswagen,” Northvolt says. In return, VW will increase its share in Northvolt.

Cells for volume models are to be built in Lower Saxony from 2025, and although Schmall did not confirm it directly, this will probably be the LFP variant of the unit cell. In both cases, the factories are to be expanded “step by step” to the annual capacity of 40 GWh.

The third factory is to be built in Spain, Portugal or France. Last week it became clear that the VW Group is involved in plans for a battery factory in Spain, which is to supply the Seat plant in Martorell. Whether this factory will also be part of the 40 GWh factories or whether it will be in addition to an allegedly possible factory in France or Portugal is currently unclear.

Factory number four is to be built in Eastern Europe. According to Schmall, the company is in talks with the governments of the Czech Republic, Poland and Slovakia as well as with the EU Commission. The year 2027 was mentioned as the planned start of production. VW has not yet given any details on the possible locations for the two other factories. There have already been reports that have given VW’s Emden location in Germany good chances here – on the one hand because of the wind power available, and on the other hand, of course, because of the vehicle plant there.

One thing is clear: if VW says it needs those 240 GWh of cells by 2030, the two other plants will also make a substantial contribution shortly after they open. VW will continue to purchase cells, but these will be mainly the 20 per cent of all cells that are not based on the standard cell.

The two-hour event also did not provide any details on the targeted technical data of the unit cell with the respective cell chemistries. However, another characteristic of the unit cell was confirmed: It is cell-to-pack capable, i.e. it can be installed in the vehicle without the intermediate step of battery modules, which should further reduce complexity and costs.

Audi boss Markus Duesmann indicated that the electric sedan developed as part of the Artemis project will be the first to use cell-to-pack technology. During his appearance, Duesmann also confirmed that the vehicle would be launched at the end of 2024, contradicting recent rumours that the vehicle would be delayed until at least 2025. The design phase has been completed and series development has begun, said Duesmann without commenting on further rumours that Artemis Managing Director Alex Hitzinger had been “disempowered” and that the development of the vehicle was in the hands of the new Audi Board Member for Development Oliver Hoffmann.

At the Power Day event, Volkswagen was less concerned with concrete models than with the technology roadmap itself. Alongside the battery, the second important pillar for the company is charging and energy. By 2025, the company wants to operate around 18,000 public fast-charging points in Europe in cooperation with partners. This would be a fivefold increase compared to the status quo and the VW Group, together with its partners, would then be operating around a third of the fast-charging infrastructure forecast for 2025 in Europe.

The German carmaker has agreed to cooperations with the energy companies BP (Great Britain), Iberdrola (Spain) and Enel (Italy). The cooperation with BP focuses on Great Britain, but 8,000 charging points with at least 150 kW are to be built across Europe – in Germany, for example, at filling stations from the BP subsidiary Aral. In Spain, the main traffic routes are to be developed in cooperation with Iberdrola. In Italy, Volkswagen wants to cooperate with Enel to expand the fast-charging network both on motorways and in urban areas.

Volkswagen says it wants to invest around 400 million euros in charging infrastructure by 2025, with “further volumes” to be borne by external partners. As Porsche CEO Oliver Blume announced, the Ionity network will also be further expanded. Porsche is also planning its own HPC network along important traffic routes, each with six to twelve 350 kW charging points, a roof and also comfortable places to stay while charging. Here, Blume did not go into further detail on the Porsche charging network, such as how this will be with third-party users.

MEB vehicles will support bidirectional charging as of 2022

In addition, manager Elke Temme, who recently moved from Innogy to Volkswagen, confirmed what outgoing VW chief strategist Michael Jost had already hinted at in a recent interview: VW wants to integrate electric cars into private, business and public energy systems in the future. This will range from buffering the self-generated solar power for later consumption in individual households to integrating the vehicle battery into the public power grid.

In concrete terms, the MEB vehicles are to have the corresponding functions from 2022, when Volkswagen says it wants to offer “a complete package with all modules and digital services – from the bidirectional wallbox to energy management”. According to Schmall, VW even has the goal of making charging free for customers.

“E-mobility has become our core business. Now we are systematically integrating further stages in the value chain. In the long term, we are securing a pole position in the race for the best battery and the best customer experience in the age of emission-free mobility,” says Herbert Diess, Chairman of the Board of Management of the Volkswagen Group.