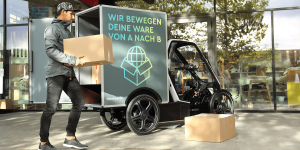 Bio-Hybrid GmbH has filed for insolvency with the Nuremberg District Court. The start of series production, which was planned for mid-2021 after the separation from Schaeffler, is thus in jeopardy.

In October 2020, the automotive supplier Schaeffler sold all shares in its subsidiary Schaeffler Bio-Hybrid GmbH to Micromobility Services and Solutions. Series production of the four-wheeled Bio-Hybrid pedelec was to begin under the new owner in mid-2021. What will become of it is unclear in view of the insolvency proceedings.

In the meantime, the local court has appointed an insolvency administrator, with Hubert Ampferl from the law firm Dr. Beck & Partner GbR in Nuremberg taking on the task. There are no further details on the background of the insolvency application so far. The operative business seems to continue for the time being: Bio-Hybrid continues to accept orders for its four-wheeled pedelec in the passenger version DUO and the cargo variant PICK-UP on its website.

The concept of the four-wheeled cargo e-bike with driver’s cabin was first shown in 2016, and Schaeffler achieved international notoriety with Bio-Hybrid in 2019 when the vehicle was shown in Las Vegas at CES.

Despite the notoriety and being part of a large company, however, progress towards series production was slow. After going on sale in October 2020 and starting orders at the end of 2020 for the two-seater DUO, Bio-Hybrid GmbH seemed to be on the right track – followed in March by the start of orders for the PICK-UP. However, order figures for both models were not communicated. The sales announcement stated that a four-digit number of vehicles would be sold in 2021.

When the concept was presented, the bio-hybrid was still one of the pioneers, but in the meantime, similar vehicles from other suppliers are already on the market. The Loadster from the Berlin start-up Citkar or the Berlin-based start-up Onomotion are worth mentioning here. Ono has already sold vehicles to logistics companies such as Hermes and DPD.