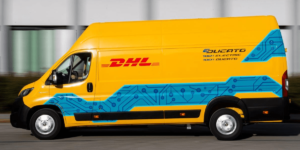 DHL Express has purchased 100 of the first E-Ducato vans for its European fleet as part of a partnership with Fiat Professional. As part of Deutsche Post DHL Group’s recently unveiled sustainability roadmap, DHL Express plans to expand its delivery fleet to 14,000 electric transporters by 2030.

With a range of over 200 kilometres, the E-Ducato is said to be “ideally suited” for last-mile delivery, the German logistics group said in a statement. In addition, the “large charging capacity” and the “long-life battery” were convincing.

Before placing the order, DHL Express carried out several test drives together with Fiat Professional, including at very low temperatures, extreme gradients and long distances, the group said. However, the announcement does not say in which countries the E-Ducato will be used.

“By adding the E-Ducatos to our fleet, we take the next important step to reach our goal of electrifying the major part of our last-mile delivery fleet,” said Alberto Nobis, CEO of DHL Express Europe. “With Fiat Professional, we found what we were looking for: state-of-the-art technology and powerful batteries which enables us to reach beyond 200 km with one charge to deliver our customers their Express shipments – fast and green.”


As part of its sustainability strategy, Deutsche Post DHL announced at the end of March that it would increasingly rely on electric vehicles for deliveries, with the target of 60 per cent of the delivery fleet to be electric by 2030. The core of the EV-fleet will still be the StreetScooter, whose production has been extended again until the end of 2022 and of which a larger “Gigabox” version is also planned. When presenting its strategy, Deutsche Post DHL had also stated that in addition to the StreetScooter, “electric utility vehicles from established car manufacturers will also be used, where available”.

Fiat had presented the E-Ducato last year. In the UK, the van costs from £47,675 net for the chassis with a small battery (47 kWh). With the large battery (79 kWh), the same model version costs starts at £59,699.  It is not clear from the press release which battery version of the van DHL Express has chosen. The smaller battery has a range of 200 kilometres (NEDC), the larger one 330 kilometres.