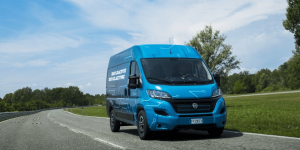 Fiat released pricing of its all-electric van running as the e-Ducato that will be available for less than GPB 50,000. So far the first variant is exclusive to people ordering in Great Britain with deliveries to start during the final quarter of this year.

Fiat selected the UK as the first market where the company opens the order books. For the time being, there is only the panel van body version with a load volume of ten to 17 cubic meters and a maximum payload of 1.95 tons. The e-Ducato looks almost identical to the diesel version, and Fiat claims that it has the same carrying capacity as its ICE counterpart.

Prices start at 47,675 pounds, the equivalent of around 53,250 euros. This entry-level purchase price is pre-tax and already includes the government bonus of 8,000 pounds (just under 9,000 euros) granted in Great Britain as Plug-in-van-grant. Other variants of the E-Ducato are scheduled to enter the British market in the first quarter of 2021.

Buyers may choose either a 47kWh or 79kWh battery pack, which provide respective maximum ranges of 99 or 192 miles, according to Fiat. That is 200 to over 330 kilometres in WLTP City mode. The WLTP combined range across all cycles is between 78 and 148 miles.

Speed is capped at 100 kph or 62 mph. Drivers may also want to take note of ‘Turtle Mode’ that is activated when the van’s battery is depleted to near empty. The vehicle then alerts the driver and goes into strict energy-saving mode. The e-Ducato also recuperates.

As far as charging in the AC range is concerned, the Italians offer three variants: Standard charging with 7 kW and optional with 11 kW and 22 kW. The E-Ducato also supports DC rapid charging with 50 kW. The latter option recharges the smaller battery in two hours and 25 minutes, while the larger cell will recover the same state of charge in around four hours.

New is the announcement that Fiat now offers a 10-year warranty on the battery.

In the UK, the Fiat E-Ducato competes with the Peugeot e-Expert, the Vauxhall Vivaro-e, Mercedes e-Vito and the larger e-Sprinter among others.

It is not yet clear which countries Fiat is targeting for market launch following the UK. At the presentation in June, Fiat laid out the on-sale “in the most important European markets” in the next few months. The German website states that the E-Ducato will be “available soon” but includes pricing that starts at 54,800 euros net.