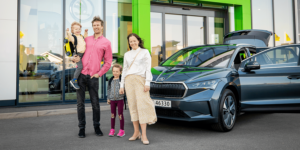 Škoda has started deliveries of its electric model Enyaq iV. The first model was delivered to a family in Norway. After the start of deliveries in the Scandinavian markets, Western and Central Europe are to follow from May and June 2021.

According to the Czech carmaker, the Espelund Talsæte family took delivery of the vehicle at the dealership in Moss. “I am delighted that our first all-electric SUV appealed to this family, and I wish them safe travels and lots of enjoyment with their new ENYAQ iV,” says Chief Sales Officer Martin Jahn. “With this model, we are rolling out e-mobility across the board at Škoda.”

The VW subsidiary does not specify which version the launch customers Silje Talsæte and her partner Øyvind Espelund have chosen in the announcement. At the start of ordering, the Enyaq iV 60 and 80 variants were available with rear-wheel drive – i.e. with 58 kWh or 77 kWh battery capacity. In the meantime, the basic Enyaq iV 50 model with a 52 kWh battery can also be ordered. The two all-wheel-drive models are not yet available.

Škoda does not comment on the delivery times for the electric  SUV in the announcement of the first delivery. Škoda CEO Thomas Schäfer said in an interview in mid-April that there were “considerably more than 20,000 pre-orders”. “The incoming orders are much higher than we had expected,” Schäfer said. Therefore, production in Mladá Boleslav is to be increased from the originally planned 350 vehicles per day to 500 “as quickly as possible”.

In the UK, the Enyaq iV has been on display at dealers for a few weeks now. Deliveries are expected to start in a few weeks, as confirmed by sales director Jahn. Prices start at £31,085 after the plug-in car grant.