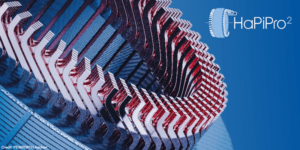 The name of the project, which is scheduled to run for three years and is publicly funded to the tune of 5.3 million euros, is HaPiPro2. The abbreviation refers to hairpin technology, a wire winding method used in the production of electric motors. Compared to coiled copper wire, the hairpin-shaped copper rods increase the amount of conductive material in the motor, which increases the power density. The PSM in the Porsche Taycan, for example, already uses hairpin windings.

In addition to Ford, the companies Engiro, Thyssenkrupp Systems Engineering, AMS Anlagenbau and Berg & Co Spanntechnik are also involved in the project. Together with RWTH Aachen University, they want to investigate “flexible, scalable and efficient new production methods that could be used for future e-motor components along a single production line”, according to the carmaker.

The project will be based in a research facility on Ford’s factory premises in Cologne-Niehl. The carmaker says its task will be to develop laser-based applications in the field of hairpin technology and to research artificial intelligence for process control.

However, HaPiPro2 is not being led by Ford, but by the Chair for “Production Engineering of E-Mobility Components” (PEM) at RWTH Aachen University. “The main objective of the HaPiPro2 project is about more than the efficient design of the e‑motor itself, but about developing variant flexibility when producing it,” says Prof. Achim Kampker, Production Engineering of E-Mobility Components (PEM), RWTH Aachen University. “The PEM at RWTH Aachen University will contribute its expertise in application-oriented research to the overall hairpin process chain, as well as the analysis of cause-effect relationships and the testing of digital methods within production planning.”

With the project, Kampker wants to bring the electric motor component into the focus of public discussion in addition to battery cell research. “We can now set clear priorities and at the same time launch an ‘innovation chain’ for continuous innovations in e-mobility products and processes,” says the professor. The PEM assumes that up to 5,900 jobs could be created in Germany around the production of electric motors.

While the supplier Marelli has already announced plans for the production of electric motors in Cologne, there is no such statement from Ford yet. But what is not yet can still become: “We are proud to host and contribute to this landmark research centre that will be a unique, advanced engineering platform for all companies to research and evaluate the future of electric motor production processes,” says Gunnar Hermann, Chairman of the Management Board of Ford-Werke GmbH.