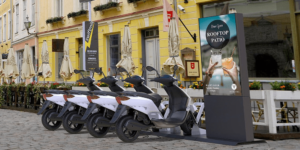 Govecs presented a new edition of its Flex electric scooter model especially for use in the sharing sector. The Flex 2.0 comes with a self-developed drive train and a choice of one or two batteries. In addition, Govecs is aiming to set up urban sharing charging stations in cooperation with Swiftmile.

Govecs introduced the first generation of the Flex in 2019, at the time as a modular and robust scooter “in the mid-price segment for diverse target groups”. Now the model is undergoing a detailed redesign specifically for the sharing business.

The electric scooter will come with up to two interchangeable 34 Ah batteries of 9.4 kg each, which “can be changed in less than ten seconds thanks to a smart self-release system”, according to Govecs. In combination with a 2,000 W motor, a range of 55 kilometres should be possible with one battery and 110 kilometres with two batteries. If two energy storage units are on board, a choice can be made between sequential or parallel discharging. The charging time is said to be about 4.5 hours.

Govecs states that the Flex 2.0 has a top speed of 45 km/h and a payload of 154 kilograms including the driver. Other features of the model mentioned by the Munich-based manufacturer include 16-inch wheels, hydraulic disc brakes and optional functions such as geo-fencing and an immobiliser. In addition, the scooter is said to be extremely robust. In this context, Govecs mentions, among other things, side bumpers, an external steel frame and break-proof plastic.

For fleet networking, the Flex 2.0 comes with a telematics box from Teltonika as well as integrated IOT and GPS. “Via an API interface, all vehicle parameters are sent to the Govecs cloud, which is hosted in Germany. This results in the possible use of the company’s own fleet management system for sharing operators, which allows, for example, the development of an app according to individual needs,” Govecs stated.

In addition to the launch of the new model, the company is also thinking about more efficient management of the charging processes of e-scooter sharing and, like other providers of micro-mobility fleets (such as Tier Mobility), is currently striving for decentralised charging stations in the sharing business area. To this end, the Munich-based company has now initiated a cooperation with Swiftmile, a California-based manufacturer and operator of mobility hubs. Swiftmile will develop a charging station that is specifically compatible with Govecs vehicles, the statement continues.

Govecs envisions customers of sharing providers parking e-scooters in the hubs after a ride and plugging them in to charge for the next user. “On the one hand, this has the advantage that electric scooters will be properly parked after a ride and, on the other hand, sharing operators can operate their fleets even more efficiently: Since the scooters are charged by the users themselves, many swapping processes will no longer be necessary in the future. This also reduces emissions from this logistical operation,” explains Thomas Grübel, CEO and founder of Govecs.

The first joint hub of the two partners is expected to start operations in the first quarter of 2022. Govecs has not yet named a location, but points out that the stations will always be located near transport hubs and in business and residential districts.

Govecs’ product portfolio currently includes the Elmoto Kick electric scooter as well as the Elmoto Loop, Govecs Flex and E-Schwalbe electric scooters and the Govecs Pro Cargo, which is designed for the delivery industry. According to the Munich-based company, high-quality “Made in Europe” products are important. The Flex 2.0, for example, is manufactured in Spain “because 80% of the supply chain is located there”. The manufacturer’s target group includes sharing providers as well as companies and private customers.

In addition to manufacturing electric scooter, Govecs is increasingly getting involved in the electric scooter supplier market. For example, since last year the company has been offering electric sharing fleets of 20 vehicles or more throughout Germany as a franchise concept under the Zoom Sharing brand. In addition, Govecs itself launched an electric scooter sharing service with around 200 electric scooters in Stuttgart for the first time at the beginning of May 2020. The Baden-Württemberg capital served as a live showcase and demonstrated how sharing can function efficiently, it was said at the time of its entry into the market for mobility services. The company is also active outside of their native country, with scooter-sharing schemes planned in London and Paris.