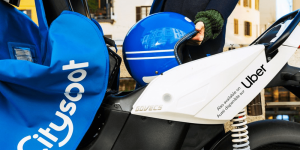 This is the first time in the world that Uber has included electric scooters in its range. While cars, bicycles, electric scooters and public transport are already integrated into the Uber platform in some cities, the US group is now testing electric bikes as a further mobility option in Paris. This is the next logical step on the way to becoming a “one-stop-shop for all transport needs,” as Uber puts it. In other words, the travel agent claims to be the sole point of contact for city dwellers when it comes to getting from A to B without their car – regardless of the means of transport.

“We’re delighted to find new ways for people to move around without the need to own a car,” says Billy Guernier, Uber’s New Mobility Director. The integration of Cityscoot into the Uber app shows how the company intends to become a one-stop-shop for all mobility needs while allowing Cityscoot to reach new customers.


Cityscoot hopes that cooperation will help them reach a broader target group. Many Parisians have already downloaded the Uber app. With no additional hurdles, they can soon borrow the scooters without extra expenditure. Also with Uber, the usual price of 29 cents per minute applies to the more than 4,000, 45 km/h fast electric scooters available in the free-floating mode. In principle, the vehicles can be rented; however also further over the Cityscoot App. Cityscoot boss Bertrand Fleurose is convinced that the partnership with Uber increases the own visibility. “Our partnership with Uber complements their offer and allows us to get further visibility among their wide rider-base,” he adds.

Meanwhile, the company considers itself well positioned for a wide variety of transport routes. As a means of choice for short distances of less than 2 km, the company proposes the Jump scooters, for distances of 3 km on average the Jump bicycles. The electric scooters were suitable for medium distances of around 4 km, the cars for longer distances of around 9 km. Also interesting: Uber recently integrated public transport information into its app. In addition to Paris, this service is already offered in London, Boston, Denver, Chicago and Sidney.

But back again to the electric scooters in Paris: Cityscoot uses models from Govecs. In the middle of last year, the French start-up company massively increased its delivery of more than 2,750 new electric scooters in Paris. Cityscoot is in direct competition with the Bosch subsidiary Coup, which has the same business model and, after a successful premiere in Berlin in 2017, ventured into the French capital and Madrid. Otherwise, Cityscoot is also pushing ahead with the establishment of its service in Nice. Here, the city gave the go-ahead at the beginning of 2018 with initially 50 electric scooters.