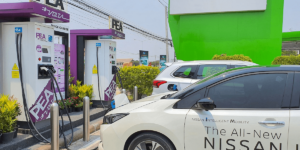 ABB has won a contract from the Provincial Electricity Authority (PEA) in Thailand to install more than 120 fast-charging stations for electric cars across the country by the end of this year. These will be 50 kW columns.

Specifically, 124 units of ABB’s Terra 54 fast-charging station will be installed at 62 filling stations owned by Thai oil and energy conglomerate Bangchak Corporation, as well as at PEA offices in 40 provinces across the country. Construction has already begun and the first 40 ABB superchargers at petrol stations are already in operation.

The Swiss company’s announcement does not say which version of the Terra 54 was ordered. The column is offered in numerous versions: The standard is always a CCS and CHAdeMO connection with 50 kW. An AC cable with 22 or 43 kW is optional, and the cables are also available in 3.9 or 6 metres. In addition, ABB offers the charging station with various payment terminals. According to the published images, both DC-only columns with two cables and columns with an additional AC cable will be installed in Thailand.

The order to ABB thus joins the list of eMobility announcements from Thailand. In April, the Thai government there announced that it would only allow electric cars from 2035 onwards. Thus, the installation of charging columns at the PEA locations should also be seen against this background. Already in March, the US company Evlomo had announced its intention to build 1,000 DC stations in Thailand over the next five years – some with up to 350 kW. At the end of April, Evlomo announced plans to build a battery factory in Thailand.

“To support the government’s policy on electric vehicles, PEA is installing a charging station every 100 kilometres on the country’s main transport routes,” says the deputy governor of the Provincial Electricity Authority, according to the ABB release. The charging stations will not only make it easier to drive electric cars in Thailand, but will also be an advertisement for BEVs, the deputy governor said.

At the end of 2020, there were 2,854 registered electric cars, according to Thailand’s Ministry of Land Transport. At the end of 2018, the number was still 325 e-vehicles. For hybrid cars, Thai statistics do not distinguish between HEVs and PHEVs, so the figure of 15,3184 hybrid cars is not very meaningful in terms of charging infrastructure use.