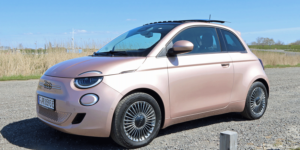 The design is vintage, the electric drive contemporary: The New 500 is Fiat’s farewell to the dogma that small cars must have an internal combustion engine. Our author Christoph M. Schwarzer considers the new Cinquecento far ahead of the electric car competition.

It’s doable; Fiat made the New 500 exclusively battery-electric. Either with a net capacity of 37-kilowatt-hours (kWh) and 87 kW electric motor as in the test car, or soon also with 21.3 kWh and 70 kW. This is Fabbrica Italiana Automobili Torino’s answer to the Mini-E. Finally, because the predecessor is simply outdated after 14 years, but still remains in production. At this stage, it is only logical to offer the New 500 without an internal combustion engine. It is contemporary in every respect and also far ahead in a comparison of electric cars.

A pleasing shape is an absolute must, as is the case with every retro car. Regardless of personal taste, one may say that the proportions are right; no detail is out of place, and everything harmonises. The Cinquecento of today has become somewhat wider, which considerably improves the feeling of space inside, and you still sit relatively high. The length is virtually unchanged. In short, the New Fiat 500 is a comfortable electric car.

It also pulls away neatly at traffic lights—a lively joy dispenser. In sober numbers, nine seconds to 100 km/h may not be overwhelming. But compared to the old 500 with mildly hybridised three-cylinder and its 13.8 seconds, it is a brave new world. At 1,365 kg curb weight, the New 500 is pretty light (for an electric car, anyway) and feels that way, too.

The lack of traction typical of cars with front-wheel-drive is not as pronounced in the Fiat as in Hyundai or the PSA EVs. Thus, the developers didn’t have to radically reduce power from the outset to get the power to the road. Granted, it doesn’t come out of tight corners as agile as a Renault Twingo, and the steering is more light than precise. But it is still fun. Further, the choice between almost resistance-free gliding in ‘normal’ driving mode forms a real contrast to the one-pedal drive ‘range’. Spoilt for choice.

What’s striking in the New Fiat 500, which came to the test in the mid-range Icon trim, was the excellent software. The control system runs smoothly and responds quickly. It surpasses the Volkswagen ID.3 and ID.4. Voice control also works well. The navigation functions so flawlessly, that any desire to mirror Google Maps never comes to pass.

For an extra 1,500 euros (standard on La Prima), Fiat installs the Co-Driver package. The company promises Level 2 partial automation. The New 500 delivers: both adaptive cruise control and a centre lane guidance worthy of its name operate as they do in the most advanced compact class vehicles. And the steering wheel recognises people capacitively, i.e. via touch. In contrast, many electric cars, even in higher segments, still have to be convinced of their presence by pulling on the steering wheel.

These details are worth mentioning precisely because they are not a matter of course. The New 500 is a new design and not the umpteenth revision of an old vehicle. Those who value this will appreciate it.

Power consumption is also significantly better than that of the Renault Zoe, for example. At a speed of 130 km/h, the Fiat shows itself to be modern with a very accurate speedometer display. The random test yielded 21 kWh/100 km, which results in a range of 176 km. This doesn’t make the little one a highway guzzler. Still, you can somehow get ahead, especially since the maximum DC charging power of 85 kW (AC-side standard three-phase eleven kW for both battery formats) was actually achievable during the test week.

More important for the typical use case of such an electric car are the consumption values in the city (12.8 kWh/100 km) and over federal highways or B roads (13.8 kWh/100 km). This sets you above the 250-km-mark in range and could even crack the 300-km under ideal conditions.

Those who think such ranges are nonsense because they only need the compact car for city drives and commutes may opt for the basic Action version. It will soon be available to order from 23,560 euros gross before subsidies. Applying the PiCG in Britain brings the La Prima trim below 30k as reported. There are also leasing offers.

The test car Fiat 500 Icon with quite a few extras came in at 35,560 euros before subsidies, so not exactly cheap. More expensive is also always possible: The convertible and the body with two doors on the right and one on the left called ‘3+1’ (so that your ‘Bambini” can only open the door facing the footpath) cost a bit more.

A final salute goes to all those Guys with capital G who overtook the fast Fiat in sometimes reckless manoeuvres, only to be disappointed at the sight of the author of this post. Sorry, Guys. The Rose Gold paint job also provoked a few sexist comments. Fiat will be aware of this and probably offer an alternative: Perhaps we’ll see an Abarth version coming from the New 500.