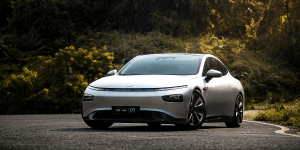 The Chinese electric car manufacturer Xpeng has presented its business figures for the first quarter of 2021. Sales and turnover increased significantly compared to the same quarter last year. However, the electric car start-up is still in the red.

Specifically, Xpeng delivered 13,340 vehicles from January to March, 487.4 per cent more than in the same quarter last year and 2.9 per cent more in the fourth quarter of 2020. The increase in sales compared to Q1 2020 was to be expected, as a second model, the P7 sedan, has been delivered since the end of June 2020, while previously there was only one compact electric SUV from the brand, the G3. Complicating matters was the generally slower-growing vehicle market and the semiconductor shortage, which is why founder and CEO He Xiaopeng is very pleased with the start to this year.

According to Xpeng, however, the net loss is mainly due to investments – for example, the slightly smaller P5 electric sedan (the first production model with lidar sensors, according to Xpeng), the expansion of the Chinese sales network or the planned expansion. The vehicle margin, which represents gross profit from vehicle sales as a percentage of revenue from vehicle sales, is now said to be 10.1 per cent. A year ago it was -5.3 per cent, and in the 2020 lock quarter it was 6.8 per cent.

Also important in sales is software. “Notably, since releasing OTA updates for XPILOT 3.0 in late January, we are now recognizing revenues from our proprietary XPILOT software,” says He Xiaopeng. “As we continue to grow with rapid technology iterations powered by our full-stack in-house R&D capabilities and strong closed-loop data capabilities, I believe that XPILOT’s software monetization will become recurring revenues as part of the revenues from our vehicle sales.”