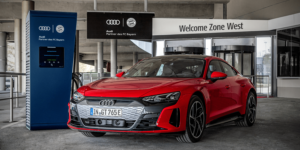 Together with its partner Audi, FC Bayern has set up 21 charging points for electric vehicles at the Allianz Arena, its home pitch in Munich. Starting this summer, the club will gradually expand the charging infrastructure further, not the least for its own players driving e-tron vehicles.

Audi did not deliver much detail on the 21 new charging points. They are not just AC chargers, though. The press picture shows an Alpitronic Hypercharger, i.e. an HPC column, alongside an e-tron GT and three of the club’s players.

“The charging facilities at the Allianz Arena are an important investment into a sustainable future for us,” says Andreas Jung, Director of Marketing, Sponsorship, and Events at FC Bayern. “This once again makes it clear that the long-standing partnership with Audi goes far beyond standard sponsorship. Hildegard Wortmann, Board Member for Sales and Marketing at Audi, adds that the expansion of the charging infrastructure was “another clear signal in favour of electrification.”

38 charging points have already been connected to the grid at FC Bayern’s training grounds in late summer 2020. At that time, Audi had reportedly already handed over 19 e-tron to FC Bayern players. The club’s vehicle fleet has been continuously electrified since then. A large part of the squad and the club’s management are now on the road in fully electric Audi e-tron or Audi e-tron Sportback vehicles. The pro players will also soon get the new Audi e-tron GT. Audi has been the mobility partner for the Champions League-winning team since 2002 and has kept shares in FC Bayern since 2011.