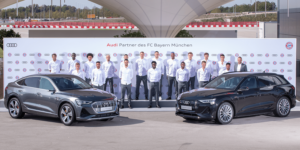 Audi has been the mobility partner for the Champions League-winning team since 2002 and has kept shares in FC Bayern since 2011. This means that the team’s licensed players have so far been able to choose their company cars from the Audi model range. These were usually high-performance sedans, station wagons or SUVs.

This year, things are to be a bit more uniform: At the weekend, Audi handed over 19 e-tron (both the SUV and the Sportback) to the team’s players. The German car manufacturer can now boast that more than half of Audi’s FC Bayern fleet is electrified. The club is also reducing its fleet consumption to less than 95 grams of CO2 per kilometre, Audi added.

“For us, sustainable premium mobility is the focus of Audi’s strategic alignment. Together with FC Bayern, we live ‘Vorsprung’, and by delivering 19 Audi e-tron cars we are sending a message in line with our path toward an electric future,” said Hildegard Wortmann, Audi Board Member for Sales and Marketing.

“It’s great that FC Bayern, together with Audi, is now the first international club on the road with electric power,” says Karl-Heinz Rummenigge, Chairman of the Board of Management of FC Bayern München AG. “The electrification of our fleet with the Audi e-tron and the provision of charging points to our training grounds are good examples showing that the partnership between Audi and FC Bayern goes far beyond normal sports sponsoring”.

Traditionally, the handover of the vehicles to the Bayern players takes place on the piazza at Audi’s headquarters in Ingolstadt as a big event for the employees and their children. This year, due to Corona, an event took place on a much smaller scale at the Audi driving training grounds near Munich Airport. The event was attended by the Bayern players and responsible persons from Audi, Marketing Director Wortmann, HR Director Sabine Maaßen and some trainees.