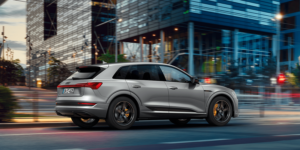 Audi is launching the e-tron and e-tron Sportback in the S line black edition. The special models of the two purely electric SUVs have now gone on pre-sale in Germany and other European markets.

Characteristics of the edition copies include an emphatically sporty exterior look with a black single frame and black exterior mirror caps and an interior with orange accents. The black 21-inch wheels with orange brake callipers are supplied by Audi Sport. The rear is darkly glazed, and the metallic colours “Chronos Grey, Glacier White and Myth Black” are available. The technical performance data remain unchanged.

In its announcement, Audi describes the e-tron, which was launched at the beginning of 2019, as a successful model. In 2020, the e-tron, together with the e-tron Sportback, was the world’s best-selling electric model from a German premium manufacturer – “compared to the previous year, demand grew by almost 80 percent. In Norway, the Audi e-tron was even the best-selling car in the market, across all drive types,” the Ingolstadt-based company says. And: in April 2021, the 100,000th e-tron rolled off the production line in Brussels.

Meanwhile, the e-tron series will be updated for the 2022 model year. According to Audi, the second onboard charger will then be available for all variants and models, doubling the AC charging power to 22 kW. For the exterior, there will also be the black plus optics package with black rings and e-tron badges, while the Dinamica upholstery material will be available throughout the interior. And as a new Audi connect service, the Apple Music streaming service is available in the car on request.